Over the course of a conversation with a rally-raid rider, a few years ago now, I happened to discover that he was a polyglot, and spoke five languages. Being ever so slightly surprised by this, I asked if he'd managed to learn all these languages in school. He responded with, "Yeah, the school of life!"

To me, that quip of his proved far more valuable than most other things that he said over the course of that chat. Of course, theoretically, I knew that experience counted for a whole lot more than mere book learning. But to hear it reinforced by someone, whose profession involved coming to terms with life's hard knocks on a regular basis, certainly helped. That it wasn't just philosophical knowledge acquired behind 'bars, but instead also practical skills not necessarily specific to his profession, was interesting. To me, it served as confirmation of the fact that as much as I enjoyed the lessons acquired during my years in classrooms at various educational institutions, nearly all of my real knowledge came from the great gift that was my own profession.

And as I type these words, I'm convinced that the thing that I love the most about this profession, is that every single day, it's offered me the opportunity to learn From some of the finest, most accomplished individuals within the world of motorsport. Some lessons stand out more than others.

From Walter Rohrl, I learned first-hand what it means to be humble. It was 2015, and after I'd interviewed him at his house, I'd asked if I could perhaps take a photo of him with some of his trophies. Imagine my surprise when he said he'd need to look for them, and then disappeared. When he came back, smiling somewhat embarrassedly, he explained that he didn't really know what good trophies were, so various trophies of his had been enlisted to serve more functional roles around the house. He turned one over, emptying it of the pens it housed, and then posed for the photograph. It wasn't the only sign of humility he exhibited, because he'd also remarked over the course of our conversation, "I am a normal man. Okay, I go a little faster than the rest, but it is nothing which is important." Since that day, I check myself quite regularly, and remind myself that humility is always better than hubris. 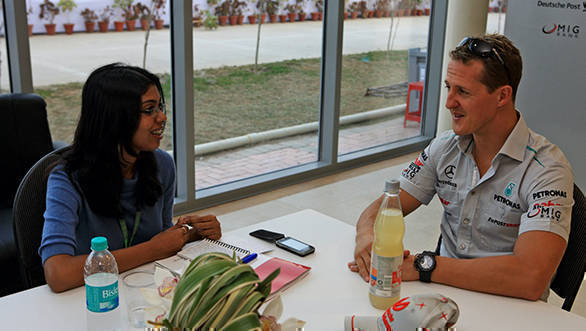 From Michael Schumacher, I learned that intense hard work can combat everything, and that sometimes, even that is not enough. Back in 2011, at the Indian Grand Prix, I'd asked Schumacher whether he'd grown up dreaming of being a Formula 1 driver. His response was that he hadn't believed in dreaming, because this sort of dream seemed unattainable. He said, instead, that he believed in the power of hard work, the efficacy of which he's proved time and again thanks to that rigorous work ethic he brought with him to Formula 1. But he'd also said, "I believe in fate. Sometimes fate can be positive, or negative." Back then, I wasn't entirely sure how someone as accomplished as him could believe in something that was outside of oneself. A force that was external, having more of an influence in one's life, than oneself. Since then, cruelly enough, Schumacher himself has demonstrated the truth in those lines he once spoke. And with the passage of time, and the few grey strands that now grace my head, I've begun to believe he was right after all. And so I remind myself often, that the best intentions and the best-laid plans, are no match for the moving finger of fate.

From Georg Bellof, Stefan Bellof's brother, who himself was an accomplished racer in his early days, I learned not to question the "whys" of life. It was the end of 2015, and Bellof had been kind enough to grant me an audience, agreeing to speak to me about his brother's life. A conversation that was impossible to have, without touching upon the fact that Stefan passed on far too early, without having had the opportunity to truly demonstrate just what he was capable of behind the wheel of a really good Formula 1 car. Georg told me that the why behind that accident on that fateful day didn't matter. "Why, why, why? We ask, 'Why did this happen to me?' In the end it doesn't really count," he'd said. What mattered merely, was that it was what it was. And from that, I learned not to dwell too much on things beyond my control.

As things have turned out in my own life, it appears that these words that I'm typing out are possibly the very last words I'll be writing for OVERDRIVE. At least for the next while. And since this could well be the last time that I get to say something to the readers of this magazine, who over the years I've grown to love, I choose to leave you with this: I wish you the strength to work hard towards your goals, even with the knowledge that fate might have something else in store for you. I wish you the resilience and fortitude that is required to stop questioning the whys in life, and instead keep on keeping on. And I wish you the good sense that one needs in order to pop that humble pill every single morning. I promise you it will serve you well.