After four years of Sebastian Vettel and Red Bull Racing dominance, this year's F1 World Championship promises to be very unpredictable indeed. The rule changes that have been implemented over the winter are the largest number of changes that have ever been made in Formula 1 history and normally every time we have a major rule change, it does shake the order up considerably. Think back to 2009, when all of a sudden Mclaren and Ferrari went backwards while Brawn GP and Red Bull emerged as the championship contenders. The teams have had to start working on their 2014 cars way back in 2012 and therefore the time, money and effort that's gone into this year's cars make it the highest ever investment of a team's resource into a single car. 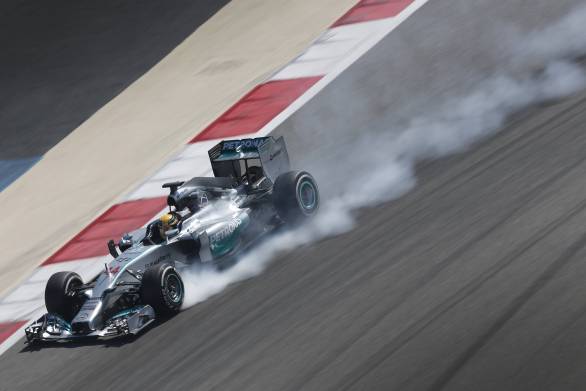 Mercedes looks like they are the team to beat in 2014

You're going to hear the teams, drivers and commentators talk a lot about the technical changes to the cars this year so I thought I would highlight them a little bit. The changes to the cars can broadly be split up into two subjects - engines and chassis.

The engines are no longer just pure combustion engines but actually "power units" now which combine a 1.6-litre turbo engine with two separate electric motors. The three engine manufacturers Ferrari, Mercedes and Renault have had a huge task to get these engines, energy storage batteries and motors working in unison together with the view that they will ultimately produce a similar amount of power.

The technology is truly revolutionary and while in the long run it will make Formula 1 more relevant to the road car industry and the cars that you drive on the road, in the short term it has made the cars quite unreliable. The cars are also now fitted with a "brake by wire" system which means that the brake balance between the front and the rear is controlled electronically. This is because under deceleration, the motors actually work as an energy generator and this energy is then used when accelerating for more power. This is done by applying negative torque under braking which in turn affects the brake balance and is proving very tricky for the drivers and software engineers.

The other major change is in terms of aerodynamics where the front and rear wing sizes have been reduced in order to reduce the amount of downforce and therefore the dependency on aerodynamics. This should in turn help to promote overtaking but the way the rules have been written for the front wing, means that this year's cars are probably the ugliest in F1 history! The exhaust blowing technology that Red Bull had perfected has also been outlawed with now a single exhaust pipe blowing air out of the centre of the car.

The other big change for 2014 is a fuel limit of 100kg for the race from the start to the chequered flag. This represents a reduction of about 40 percent from what the teams used in the past which is a huge amount. Obviously the difference this year is that a chunk of the power is being produced by the batteries and motors and therefore the requirement for fuel is less, but the 100kg limit has made it very tight indeed. We're going to hear a lot of radio chat between the engineers and drivers to save fuel throughout the season I think.

So what does all of this mean on track ? While there were early doom-mongers saying that the cars would be considerably slower, at the last Bahrain test however, all those fears went out the window as the top guys were already lapping within a second of last year's pole position time. In fact, the 2014 cars are actually 20 kmph faster in a straight line than last year! One thing that the public will notice though is a totally different sound. The new engines are limited to 15,000 rpm which means that instead of the 18,000 screaming banshee, the sound is more of a raspy growl.

So who looks strong going in to the new season? Mercedes have clearly emerged from the winter testing with the best engine so far and the Mercedes works team with Hamilton and Rosberg start the season as clear favourites. Williams have timed their switch to Mercedes engines superbly and they look like they are in good shape as well. The team has signed a whole raft of new technical staff over the last 6 months and it's starting to pay dividends. Ferrari and McLaren are fighting over the next few spots with Force India but you get the feeling that Mercedes will always make sure that their main team stays just that little bit ahead in a season of big engine developments. Red Bull Racing and the other Renault teams are clearly on the back foot as they have had a huge amount of reliability trouble. Whether they can recover from this to make it 5 World Championships in a row will be their biggest challenge yet.

On the driver front, there are a lot of changes with only Mercedes and Marussia retaining their line ups. Kimi Raikkonnen versus Fernando Alonso at Ferrari will be one of the big talking points of the season. After the frustration of not winning yet another World Championship, Fernando and the team had a bit of a lovers quarrel last year. The Italian giants decided to sign Kimi and show the Spaniard that no star is bigger than the Scuderia. Their characters are poles apart and it will be fascinating to see how it pans out. My money is on Fernando, but we'll see!

Mark Webber has moved on to sportscar racing, making room for fellow Aussie Daniel Ricciardo to move over from Toro Rosso. Dan's a great friend of mine and a very fast driver who should push Vettel especially in the second half of the year once he's settled in. Mclaren's new signing Kevin Magnussen looks like being something special alongside Jenson Button, while Felipe Massa's move to Williams could give him a new lease of life after many years as a number two driver. Nico Hulkenberg is a great new signing for Force India while Sergio Perez's huge Mexican sponsorship money will keep them happy as well.
All in all lots of new rules, new cars, new driver line ups and a new era of Formula 1 kicks off!