Recently the big news was that a politician's son in Bihar, who was in a Range Rover, shot a 19-year-old student in a Maruti Swift, because the boy and his friend had the nerve to overtake his big and powerful SUV. After shooting and killing the boy, the politician's son went missing for a couple of days. He was subsequently arrested because of the huge public outrage. But as is to be expected, the politician's son claims he was in Delhi at that time. His father says he shot in "self-defense". The cover-up has apparently already begun.

Most Indians will not find this incident shocking, because it's become the norm in our country. The high and mighty, who rule us, believe that they are above the law and superior to the common citizen who actually votes them into office. Such politicians also have a huge attraction for SUVs. This is presumably because most SUVs are big and powerful and have the street presence to intimidate other road users. And when you are in one as big and powerful as a Range Rover, how dare a puny 19-year-old student in a Swift have the gumption to pass you. Shoot the bugger, that's what he deserves for being discourteous. 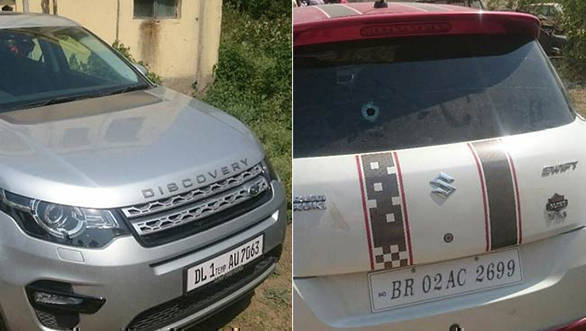 A few months back, I drove from Delhi to Kolkata. The highway goes through U.P., Bihar and Jharkhand. We were two of us and must have gone just about 100 km from Delhi when we saw a man on a motorcycle with a shotgun. Then we saw another, and soon it became a common sight. We also saw gun-toting men at many of the toll booths. When I asked one of them why they were carrying guns, he said, "This is to take care of those who refuse to pay the toll."

The aggressive driving on the highway was also very disturbing. Time and again, we had vehicles (mainly SUVs) come straight at us on the wrong side of the road. If you looked into the eyes of the oncoming driver, you could detect a glint of perverse pleasure in having pushed you off the road. My friend, who is a typical Bombay boy, gestured aggressively at some of these "I rule the road" kind of drivers. I asked him to stop because this was not Bombay, but the "Badlands of India" where we could get our heads shot off for showing any kind of dissent or displeasure. All through our journey, I drove very defensively and moved out of the way of every aggressively driven vehicle. There were hordes of them, some with "Government of India" written on them. A few common things were that they were mainly all SUVs. Most had blacked out windows that are banned, and several had political party flags or stickers. If you managed to look inside, they were packed to capacity because most people in these areas move around with their gun-toting bodyguards or goons.

Whenever we stopped to eat or refuel, we felt naked because our MPV did not have a luggage cover or dark film to keep out prying eyes. And there were plenty. Most were disdainful too. We stopped at a pump in Bihar, and my friend got out at the entrance to have a smoke. While the vehicle was being filled, five to six guys came over to me and started looking inside the vehicle. One even asked what we were carrying and where we were going. I mumbled something about being from the press and managed to extricate us from the situation.

A little later I stopped to ask a cop for directions. He immediately started looking inside and asked to see our IDs. When he realised we were from the media, his attitude softened a bit. He not only gave directions but also some advice. "Don't get into a fight with any locals. Don't give a lift to anybody. Don't react to any comment or abuse hurled at you. Don't tell anybody where you are going. Don't flash money or remove your wallet in public. Keep just a little amount handy in your pocket for expenses. Don't move after dark. Don't even trust the cops; they are all not like me!"

I have been driving all over India for the past 34 years. I have seen the behaviour on the road and the driving deteriorate to no end. The law and order situation has also got worse. But what we experienced on the drive a few months back was truly distressing. Not only was the driving very aggressive, but the attitude was - get in my way and you are dead. The display of guns and muscle power was scary, and the "prying eyes" everywhere truly make it a trip I would not want to repeat in a hurry.