The Covid pandemic has affected every person, business, project and plan. The one thing that apparently remains immune to the effects of the pandemic is the Mumbai Coastal Road. Work on it is determinedly continuing 24/7 and even during the peak of the lockdown in April and May, the construction only stopped for a few weeks before restarting with a renewed sense of urgency. Normally one would commend such commitment and compliment the government and BMC (Brihanmumbai Municipal Corporation) that is constructing this 'Coastal Road'. But in this case there appears to be more than what meets the eye. In fact it smells a bit fishy, and that's not just because it's happening by the bay. 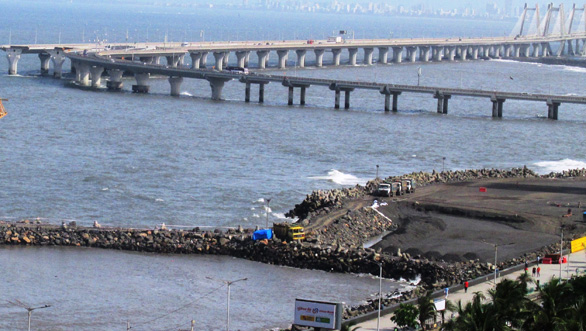 The Mumbai Coastal Road construction happening near the Worli end of the Bandra Worli Sea Link.

Phase 1 of the Mumbai Coastal Road from Marine Drive to the Worli Sea Link that is under construction right now, is about 9.9 kms in length and will cost around Rs 14,000 crore. It's expected to be completed by mid-2022 and will substantially reduce driving time from Bandra to Nariman Point, the business district. 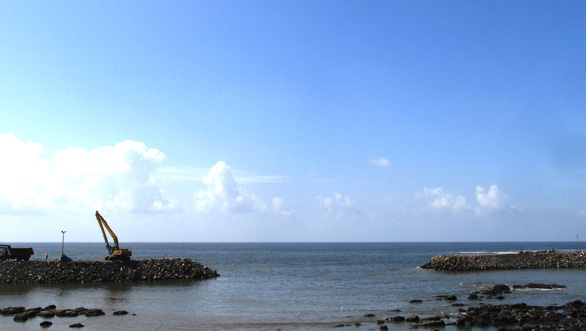 The reclamation is extending far further into the sea than most people anticipated and more land is being reclaimed than is needed for the road.

The project received clearance from the Union Ministry of Environment and Forests in June 2015. Many concerned residents and environmentalists opposed the Mumbai Coastal Road due to the reclamation and the very real possibility of environmental degradation along the coast. Some petitioners moved the Bombay High Court, which subsequently ordered all construction activities on the project to be halted. The BMC then appealed against the order in the Supreme Court, which in December 2019 permitted contractors to continue work in areas where construction had already begun, but warned the BMC against excess reclamation for the project. 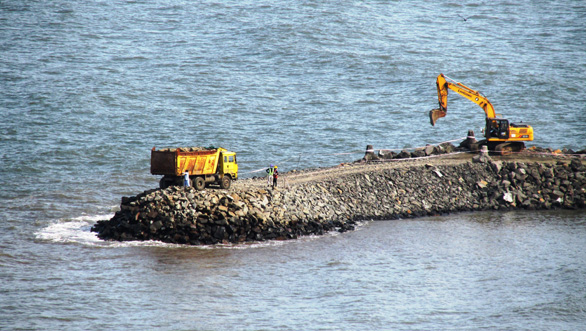 Work is on around the clock. Even in the over two month's long complete lockdown, it only stopped for a couple of weeks.

In September 2020, the BMC told the Supreme Court that over and above the 90 hectares that it had originally planned to reclaim, it needs an additional 21 hectares of land.  Speaking on the excess reclamation on 7th October 2020, Chief Justice S.A. Bobde said, "It appears someone is taking the court for a ride. The clearance was only for 90 hectares. Anybody who is constructing should be on notice that everything is subject to final order." As per a Times of India report, the highest court in our land also indicated it would not vacate its interim order allowing reclamation of sea strictly for construction of the road and no other purpose. 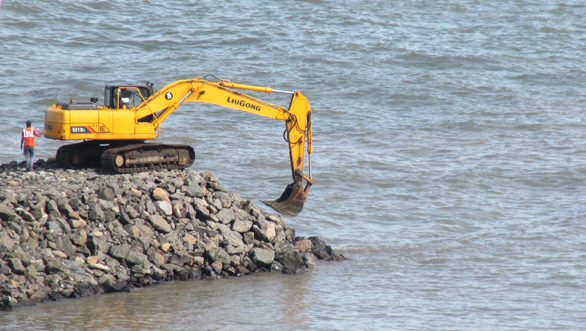 The Mumbai Coastal Road has severely degraded the coastal environment, particularly the corals and marine life.

Given all this, I think the real story lies in how the BMC proposes to utilize this reclaimed land. As per the original BMC plan, of the 90 hectares only 20 is to be used for the actual road. The rest of the reclaimed land would be employed to construct promenades and water parks, jogging tracks and walking paths, and dedicated bicycle lanes along with open green spaces, which are a big bonus in a congested concrete jungle like Mumbai. 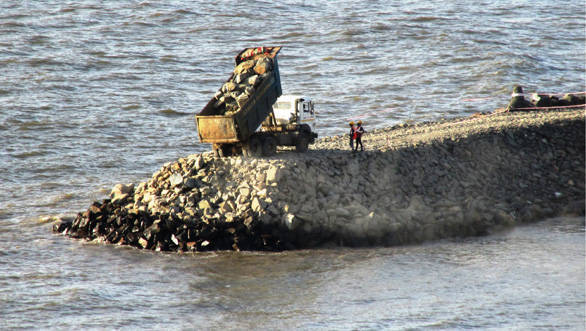 Apparently, heavy rocks from the drilling and excavation sites of the under construction Mumbai Metro, are being used to reclaim the land for the coastal road.

Sounds good doesn't it. Parks, promenades, walking tracks, green spaces next to the sea and what not. Well the reality might be a little different. The reason I say this is because normally the authorities are least concerned about the environment or quality of life. The Mumbai Coastal Road project has been sold to us with the promise of decreasing travel time and congestion, which will also result in substantial reduction in air pollution. But once the land has been reclaimed and the Mumbai Coastal Road built, what is the guarantee that the additional reclaimed land will be used for the specified purposes. Someone might suggest that this land is better utilized for some commercial activity as this will help recover the cost of building the road. A developer could come up with a proposal to lease the additional reclaimed land and build some shops, showrooms, spas and restaurants on it. As we know anything is possible in our country. 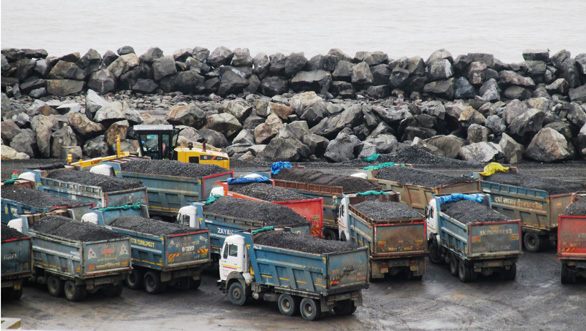 Everyday hundreds of trucks bring tons of rock, stone and gravel to where the Mumbai Coastal Road is being built. 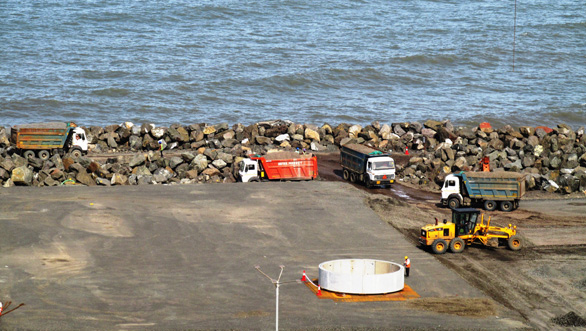 The HTL (High Tide Line) has been pushed back from the shore by building a partially submerged and angled sea-wall.

Thanks to all this, the very purpose of the Mumbai Coastal Road could be defeated. The proposed parks, promenades and so on, might actually attract more people and vehicles to visit this seafront. And if that happens, there will be more traffic and crowding than before. If the BMC had reclaimed just the 20 hectares needed for the road, such questions or doubts may not have risen. But now that they may have 91 hectares of reclaimed supplementary space, one cannot help but wonder if the real aim was to build a road, or to create expensive and much in demand sea facing land. 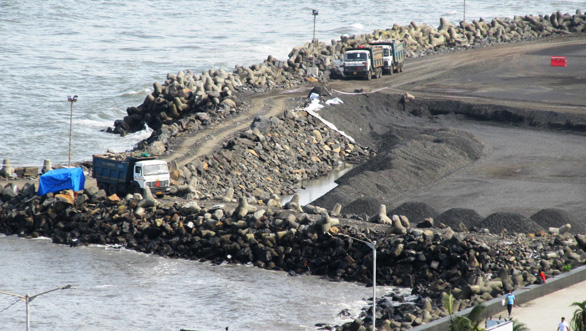 The entire construction area has flood lights to enable work to continue till late into the night.

In my opinion the Mumbai Coastal Road could have been a boon, but now I fear it might become the bane of Mumbai. So many residents are already appalled at the destruction of the coast and the receding of the sea from the shore. But maybe this is the start of something even sadder. As someone who has lived all his life by the sea in Mumbai, I hope and pray I am proved wrong. 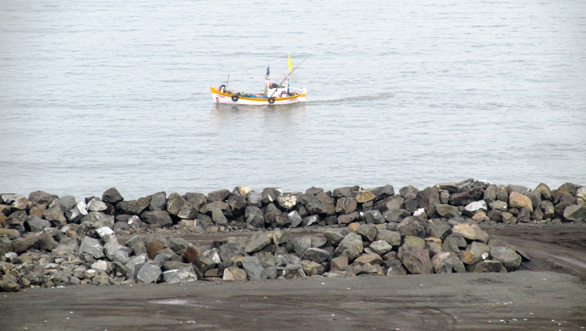 The traditional residents of Mumbai, the Koli fishermen, have complained about the coastal road having a negative impact on their fishing waters. 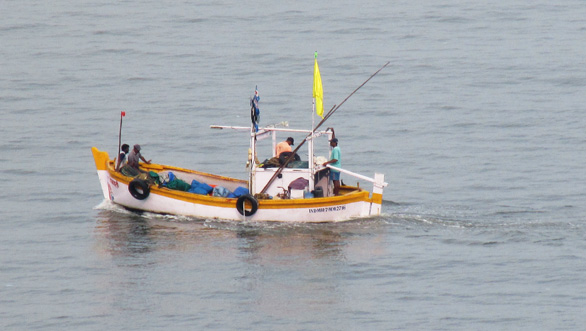 Though the coastal road is still far from being completed, the Koli fisherman say the construction has already disturbed the fish and reduced the size of their catch.