Sometimes I think about words. Usually specific words that have come up in recent conversations rather frequently. And it's two such words, that have surfaced all too often for my liking and bludgeoned me on the head until I could no longer ignore them, that served as a trigger for this particular column. "Deserving" and "undeserving".

Just look at them. They even look tricky, these words. And they're often used in contexts that are tricky too. The very idea that someone is more deserving of something than someone else, puzzles me. As much in motorsport, as in any other aspect of life. But let's take motorsport for now. And let's take the remarkable example of Felipe Massa, whose 250th grand prix at the 2016 season finale at Abu Dhabi will mark the end of a long career in F1. 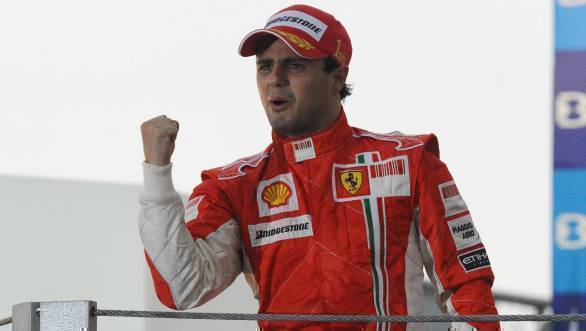 Felipe Massa celebrates his win at the 2008 Brazilian GP, while also bravely trying to hold back tears after losing the title by one point

Do you remember those last few nail-biting laps of the 2008 Brazilian Grand Prix? For about 10 seconds, Felipe Massa was world champion. He'd crossed the chequered flag first, and was officially at the head of the drivers' championship standings. Then, sixth-placed Lewis Hamilton managed to get past Timo Glock's Toyota and move into fifth. His championship tally went up to 98 points, one more than Massa's 97. Hamilton was world champion.

Massa stood brave-faced on the podium, thumping his chest and pumping his fist in the air. It seemed like he was dedicating his win, and his gracious ability to handle the loss of a championship, to his countrymen. There are many things that Felipe Massa will be remembered for in Formula 1, but most of all, I suspect, it will be for the manner in which he conducted himself on the podium that difficult day in Brazil.

Since that day, Massa's results on track aside (and irrespective of the tragic circumstances of the accident that saw him sit out most of the 2009 season) my respect for him has grown immeasurably. This, mostly because of the fact that he'd never once given the world any sort of indication that he believed he deserved the title more than Hamilton. Instead, he celebrated like a person who'd given something his all, would celebrate. He knew that the fight that he put up for the championship had been fierce. He knew that he'd left no stone unturned. And that day, when he raced to victory in Brazil, he had been the very best version of himself that he could have been. Felipe Massa was well aware that there was hard work that went into racing. And he was also well aware that he'd done his share of hard work diligently since the day he first climbed into a go-kart. He also knew that Lewis Hamilton had very likely done his share of hard work diligently too. There was no way to measure who worked harder; there was no way to accurately measure who had more luck. And measuring talent, well, that's a darned tricky business too. All that remained was what had transpired that day in Brazil. And beyond that, all that remained was acceptance.

My point is this. Very often, despite our best efforts, things don't turn out the way we planned for them to. Or indeed the way we hoped and prayed that they'd turn out. It isn't because the universe has some grand plan to sabotage all our dreams. It's because this is the way things are. Which is why I am writing this today. I know you trained hard, you did countless laps at the wheel of a simulator, you walked the track, you bicycled around the track too to make doubly sure that you had the circuit imprinted into your brain. You topped the practice sessions, you claimed pole, you even led every single lap of the race until, with one lap to go, your gearbox gave up. You didn't win.

Don't let that sour you, and don't become cynical. Don't envy the victor his trophy and the giddying height of the top step of the podium. Don't covet the points that could have, should have, might have been yours. Don't waste your time on if onlys. Focus on the loss only as much as is required. Maybe you'll learn how to make sure that something similar doesn't happen again. Maybe you won't. Accept it and move on.

Shift your focus to your next goal. That next track that must be learned in minute detail, every little chicane and bump committed to memory, every spot that you ought to be short-shifting to gain that half a second a lap, burned into your brain. Work, work, work. And be the best that you can be. Being jealous of someone else's success is pointless. Being jealous of the resources that someone else had at his disposal to achieve that success is also pointless. It is the way it is. Your task is to do the best you can with the resources that you have. To play fair. To be honest. No, don't get used to losing, and, if you can, avoid making a habit of it. But if and when it does happen, be gracious about it.

The truth is that greatness cannot be measured in the number of trophies that you accumulate, nor in the number of titles you accrue. After all, not all champions are great. Not all greats are champions. It is the way of life. And it's okay that it is so.