One of this year's highlights for me was a drive in the John Cooper Works Mini Countryman X-raid All4 Dakar. This is the same SUV that won the 2014 Dakar, the most formidable rally raid event in the world. But this, here is what moved me about that whole experience. It has nothing to do with the vehicle I drove. During the course of the drive we got an opportunity to sit with Michel Perin who is Nani Roma's co-driver and get a deeper understanding of what it means to be at the Dakar. 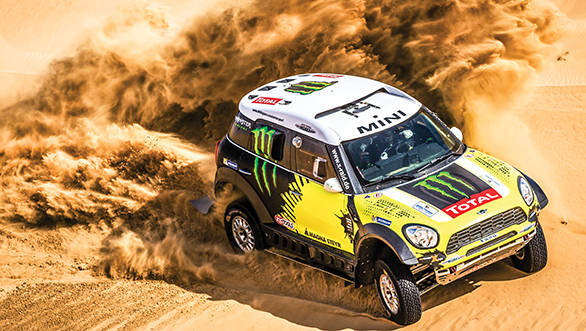 The Dakar is unlike any other racing event in the world, its claim to fame comes from being one of the longest, most arduous rally raid events in the world. Held over two weeks and spanning several countries, the Dakar tests both man and machine in some of the most extreme conditions known to both. But that is less than one quarter of the challenge that competitors on their motorcycles, SUVs and trucks face.

The biggest obstacle is that in the Dakar, you enter every stage blind. Unlike the WRC or any other rally, you aren't allowed to recce the stages. This means competitors are prohibited to travel to anywhere close to the rally stages. So a holiday in Argentina, Chile or Bolivia is quite out of the question.

Contenders get their road books the night before the rally is flagged off for the coming day's stage. This happens every evening until the rally concludes. Knowledge gleaned the year before makes a difference but climatic conditions and human intervention change the landscape in ways the competitors know nothing of. You get notes from the organisers about modifications but until you hit that spot yourself in the rally, you have little or no idea of just how good or bad that modification is.

Then there is the problem of balancing work and rest. It is imperative for any driver and co-driver team to get adequate rest during the Dakar. But notes have to be made, road books have to be studied, vehicles have to be looked after, meals have to be consumed and a paraphernalia of other activities conducted. And all of this has to be done within a stipulated time, sometimes not more than three to four hours. After which, competitors try and get as much sleep as possible before flag-off, early next morning. Sleep deprivation on the Dakar can be life threatening so getting as much shut eye as possible is imperative.

Michel mentioned a fantastic fact concerning modern satellite navigation technology. The old days, where maps, sextants and road books were the only navigational tools, were apparently much easier to deal with. I'm not sure if that is an old-fashioned notion, but even today, Michel carries all of those tools on the Dakar! What I now know is that with the new navigation systems, the tolerances provided to each competitor to hit their waypoints before going on to the next are extremely small. Michel has in fact seen several competitors running around in circles just a few feet short of the marker trying to hit it and move on.

It is this and the several other experiences that make up the Dakar. It's not just about driving from point A to B to see who finishes fastest. As Nani Roma mentions before, speed is never of the essence, it's all about surviving till the finish line looms ahead. And very often, to do that you have to read the signs all around. If the grass is shiny and green, that means it has rained recently and that the surface will be softer, compared to where the grass looks dry and brown and the surface, consequently, harder. One degree in the wrong direction or an ill-timed jump could spell a quick end. And for someone wanting to conquer the toughest motoring challenge in the world, not completing the Dakar is not an option. Thus the Dakar is about resilience, luck, experience, fortitude and having reliable machinery. It's not about just having the fastest, most powerful machine in the parc ferme!