A turbocharged boost for the motorcycle future

Motorcycle technology is at a bit of an impasse. The epitome of motorcycle technology has been the litre-class sportsbike and its cousins. And look at how far we've come in the past few years. We've hovered endlessly at about 200PS in peak power, the weight of the motorcycles hasn't gone down significantly, and after the heady leap from the 140-somethingPS R1 in 1998 to the 180PS litre-bike progress has slowed.

There are, of course, a thousand external reasons for it - economic gloom, falling sales, older riders and so forth. But we've also, I believe, hit the physical limits. Perhaps the current materials cannot handle more stress without significant cost... the upshot is extracting more power seems to be slowly headed towards bigger displacement engines. Which is a bit of a salmon. Because the world is busy making smaller and smaller engines so why should motorcycles be growing.

I've long believed that boosted engines, whether supercharged or turbocharged, would return to motorcycles. We have had them before and they haven't worked. Back then, small turbos were harder to make and when they did enter production, their positives were outweighed by the turbo lag which is a far bigger problem on two wheels than on four wheels. 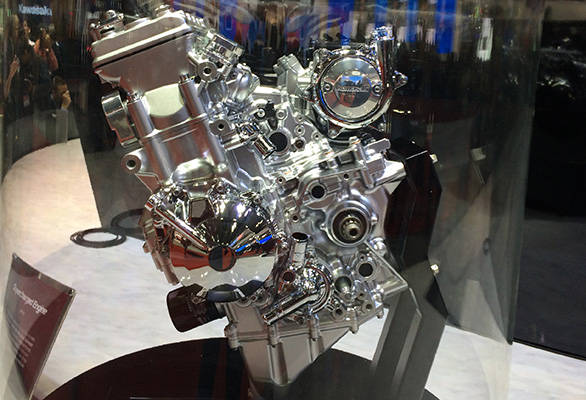 But now the time is right. We know lots about how to make turbos and superchargers work, lots about how to miniaturise them and what we cannot engineer out, we have the software to tide over. External factors are also in play. While motorcycles have so far not been the focus of the ever-tightening emissions laws in most of the developed world. the day that starts, everyone seems to tell me, is nigh.

Since reinventing the wheel is both costly and time-consuming, motorcycles, will once again, go the car way. They will wear smaller engines featuring unnatural aspiration. The first signs were at Tokyo where Suzuki showed their sweet looking Recursion concept featuring a 588cc twin with a turbocharger. This allowed the wee street bike to make 100PS and more importantly remarkable torque, peaking at just 4500rpm.  Across the aisle was Kawasaki who were vaguer about their boosted engine plans but did show a glittering inline-four wearing a small supercharger, something a set of patent drawings from a week earlier had promised.

What I expect will happen is that we will see within a year or two the first turbocharged production motorcycles. I think they will be large motorcycles to start with - I'd go with the top-flight class of touring motorcycles. A turbo 1000cc engine that does the job of a 1400cc engine will bring economy and tank range, while any interruptions in riding smoothness - these will be first generation turbos after all - will be handled with software. The intial turbos and superchargers will be the simplest form of the beast - fixed geometry units.

Within a few years, the turbos and superchargers will be matter of course and I expect that in time, the drive to make smaller, more efficient engines will lead to variable geometry and perhaps even twin- or twin-scroll turbos and what have you.

In this light, India is a strange and wonderful motorcycle market to be in. On the one hand, we're finally headed for the big middle-weight motorcycle boom - everyone expects to see a big sales explosion in the next three-five years. On the other hand, the global motorcycle industry will itself go through a period of extraordinary transition as the dominant engine format in motorcycles, naturally aspirated engines, gives up a significant share of the workload to turbocharged and supercharged engines.

How many years before we write nostalgic love letters to naturally aspirated motorcycle engines just like many older writers write what-could-have-been eulogies to the brief blossoming of turbo-motorcycles in the late-70s and mid-80s.