Nissan has unveiled the new Navara EnGuard Concept at the 2016 Hannover Motor Show, based on the double cab Navara Tekna pick-up truck. The EnGuard Concept is designed to be a rescue vehicle which can work in some of the harshest environments on the planet. The concept has a ground clearance raised by 50mm, uses beefy 285/75/R16 off-road tyres for better traction. There's also a snorkel on the driver's side A-pillar, if the need arises to wade through deep water. The wheel arches feature fibreglass overfenders which will protect the bodywork from dents and scuffs.

The Concept uses the same ladder frame that underpins the Navara, with the exception of a fully adjustable sports suspension. It is powered by a 2.3-litre twin-turbocharged 190PS diesel engine that is mated to a seven-speed automatic transmission. The EnGuard uses an on-demand four-wheel drive system and stopping power is provided by 300mm drilled and ventilated discs. It gets a tow bar that has a 3,500kg towing capacity (same as the standard Navara) and a spare wheel, stored under the bed. 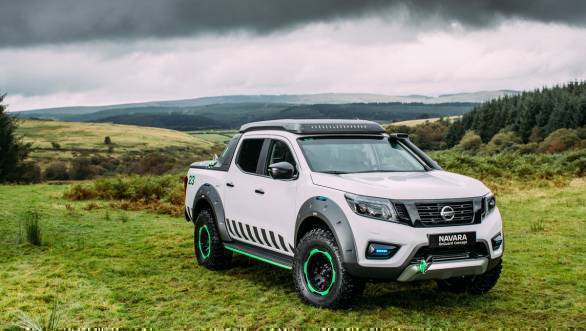 The Nissan Navara Enguard's tailgate is coated with a moulded liner, behind which the bed of the Concept is loaded with life-saving medical equipment. Stored on two outward opening fibreglass trays are a resuscitation kit, oxygen tanks, two-way radios, life-jackets and even an axe! It also houses two 2kWh battery packs at the side, each with seven Nissan EV batteries taken from the Nissan's Leaf. The battery packs are constantly charging when plugged into their aluminium housing, making it easier for the batteries to be used at anytime. Each pack has two AC 220v power sockets and three USB ports. They can be used for a whole range of things, right from powering the equipment on board, to additional equipment that needs power. There is also the DJI Phantom 4 drone, that can be used for search and rescue, stuffed amongst all that life-saving gear. The feed from the drone will be displayed on a HD screen located in the back. On either side of the load bed, there are two additional power sockets hidden behind aluminium covers which get their power from the two battery packs. The aluminium rails positioned over the rear deck-lid can be used to store additional equipment. 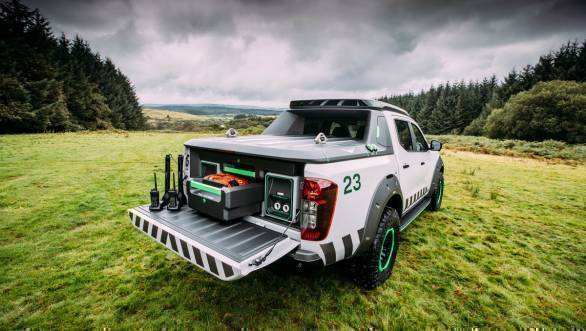 Being based on the top of the line Navara pick-up, the concept will also get all the standard features that the Tekna gets, like the NissanConnect satellite navigation system, dual-zone climate control and 360 degree cameras. The roof of the EnGuard Concept has been raised by 136mm, incorporating a 360 degree lighting system attached to it, along with blue emergency strobe lights. 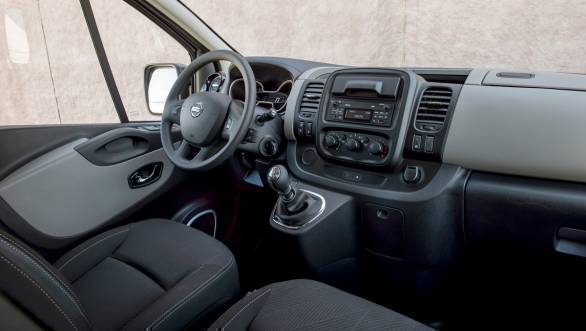 All the decorative elements inside have been blacked out, so that the occupants can focus better on the task at hand. The seats get a subtle redesign, covered in rough and tough fabric, which can withstand a lot of strain. The door handles are chrome and the door pockets are of a florescent shade so that they will be easily identifiable in stressful situations. It is unclear if the Navara EnGuard concept will make it to production, but the battery technology that the packs incorporate show significant promise for integration in other sectors.