MV Agusta India has inaugurated its second showroom in the country and its first in the state of Gujarat. The new MV Agusta Ahmedabad showroom is located at S G Road. Apart from selling vehicles the showroom will also service MV Agusta two-wheelers. On the opening day itself the showroom delivered eight vehicles.

MV Agusta motorcycles are exclusively available in India through MotoRoyale, a Kinetic Engineering entity. MotoRoyale has officially stated that it will be expanding its sales network across the country. New dealerships will be inaugurated soon in Bangalore, Chennai, Delhi and Mumbai. The company also plans to open four or five dealerships in 2017. Apart from India, the company has the distribution rights for Bangladesh and Sri Lanka as well. The company inaugurated its first showroom in Pune in May 2016. 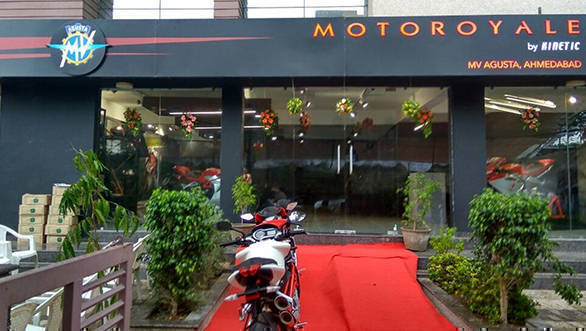 Speaking on the launch, Ajinkya Firodia, managing director of MV Agusta India Pvt. Ltd., said, "Gujarat is one of the most important market for superbikes in India. MV Agusta has received a terrific response in the country, and we have already sold over 15 motorcycles since launch.  With our network expansion, and with partners like MV Agusta Ahmedabad, we are confident of MV Agusta's grand entry in India"

MotoRoyale has previously told us that that will be selling only MV Agusta motorcycles for two years. Beyond that timeframe they will start offering other brands. The MV Agusta range in India comprises of the F4, F4 RR, F3 800, Brutale 1090 and the Brutale 1090RR. 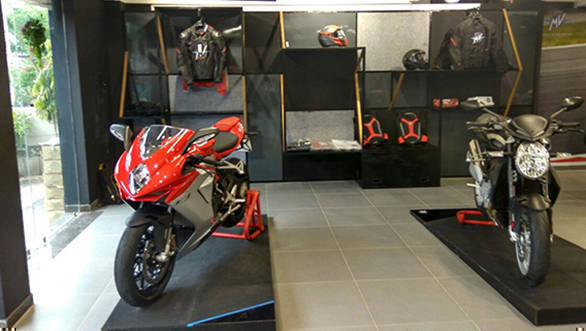 The MV Agusta F4 has been designed by the renowned Massimo Tamburini and is powered by a 998cc four-cylinder engine which makes 198PS and 111Nm of torque. It is priced at Rs 28.05 lakh (ex-showroom, Ahmedabad).

The MV Agusta F4 RR is a more powerful version which makes 201PS and has a claimed top speed of 297kmph.  It is priced at Rs 37.55 lakh (ex-showroom, Ahmedabad).

The MV Agusta Brutale 1090 RR makes 158PS. It is the most expensive offering in the range and is priced at Rs 26.44 lakh (ex-showroom, Ahmedabad).

MV Agusta is an Italian brand that was established in 1945. Mercedes-AMG owns a 25 per cent stake in the company. In March this year, reports surfaced stating that MV Agusta had filed for bankruptcy in Italy. The company later clarified that only its finances were being restructured.