MRF Challenge 2015: Tarun Reddy takes his first victory in Round 3

Indian racer Tarun Reddy, came a away from a bad practice and qualifying session, to secure his maiden victory at the MRF Challenge 2015 in the third round of the championship. He won the second race which was red flagged on the third lap after Guiliano Alesi crashed. The results were based on the combined times of the race before it was red flagged and the five laps after the restart. 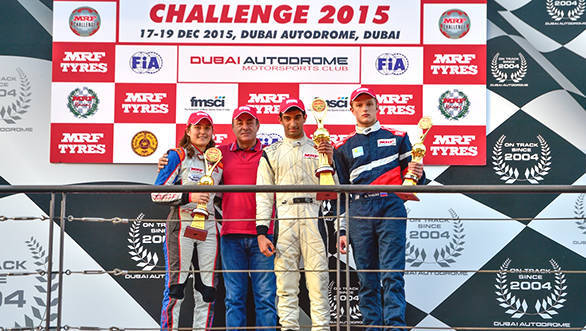 The first race saw pole sitter Alessio Picariello take the win after a tough battle with Pietro Fittipaldi and Nikita Troitckii. Behind them, were Tatiana Calderon in fourth, and Tarun Reddy who made an impressive climb up from 10th on lap 7 after some skilful overtaking manoeuvres.

In the second race, Max Fewtrell was on pole with Tarun Reddy starting second on a reverse grid. By the first corner, Reddy made his move and was in first place. In the same lap, Guiliano Alesi and Sean Walkinshaw crashed out in two separate incidents, bringing out the safety car. The race was finally red flagged on lap three to fix the barrier. After the restart, Tarun Reddy took the lead again at the start and was followed by Fewtrell and Calderon. By the penultimate lap, Calderon managed to pass Reddy to finish first, while the latter fought off four cars to hold on to second. But Reddy was declared the winner by a margin of 0.26 seconds.

Tarun Reddy said after his win," "We had a really tough start to the weekend but in Race 1, the car felt really good and I managed to overtake quite a few drivers to finish on P5. At the restart of Race 2 I got a good start again and managed to pull away. Tatiana Calderon managed to get past me and I was disappointed when I crossed the finish line in 2nd place. When I came into the pitlane they told me I had won, so am really happy with the result."