I've made a boo-boo. I flung myself over Ferine's bars, broke the left mirror with my hip, scraped the forks, chipped the front rim in three places, broke the radiator cover and bent the radiator. And I did it by following my instincts.

The chaps who designed and built the access-controlled Pimpri-Chinchwad stretch of the old Mumbai-Pune highway were partly responsible and I hope that someone takes Negan's bat Lucille and gives them a sound thrashing. 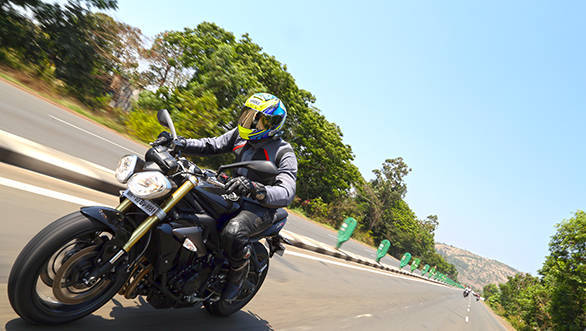 But the fact is that I believe, ever more firmly, that if you've had a moment or an incident, then you did something to contribute. Or failed to do something you should have to avoid it.

Let's start with the minor issue here - the roadway design. I say minor because I can't fundamentally influence it. So in the realm of things I can change or do, roadway design is of little value in terms of effort and introspection.

What happened was simple. Ashok George (Yamaha YZF-R3) and I (Triumph Street Triple) were looking for the correct exit. Traffic was light and speeds were swift but not illegal. We missed the correct one. It is signposted badly so it arrives without warning. It's also much earlier than you expect so you don't intuitively realise it is the correct one. When we hit the underpass, I knew we'd have to double back. The next exit comes up even more suddenly. Ashok, behind me, decided (correctly) to keep going and slow to a stop and consider the options later.

But since I'm two steps removed from wearing my underpants on the outside with a matched cape, I decided I could make it, no sweat. Except that the blocks lining the edges of the road hide the double speed bump in the exit constructed about seven-eighths of the way across the width of the road. Beautiful.

The bike got flicked to the right and moments later it got wedged in a triangle of concrete blocks. Fortunately, I was on the brakes the whole time so the final deceleration wasn't magnificent. I got up with only a slight bruise where the mirror met my hip and two nasty looking scrapes on my shiny new Arai. The bike was rideable enough and it went back to Triumph without incident or worry.

But the fact is that I caused the crash.

We spend a lot of time at the Indimotard-OVERDRIVE school, Throttle Wide Open, talking about how human instincts and motorcycle riding don't sync well at all. Our automatic reactions usually aggravate the hazards and good riders train to allow conscious decisions based on great sensory data to override instincts. This is something we have gone over repeatedly in Better Riding as well.

I failed to apply it. The appropriate response on spotting the second exit too late should have been, "Crap, we need to slow down to 15kmph and keep going to find the next exit because this road was designed by utter and complete idiots." Mine actually was, "I think I can turn this thing quickly enough... Dammit, no!"

I realised, as I got back up, that I do have a very clean record when it comes to crashes. They've been few and far between and it's something I'm quite proud of. Perhaps that made me complacent or perhaps it gave me an inflated sense of my abilities.

In either case, I was strongly reminded that riding motorcycles is a beautiful persuasion that has a very hard, finite edge.

Motorcycles aren't a casual fling. They simply aren't. They require effort, time and undivided attention. They also require a calculated understanding that you're willingly taking on a greater, entirely optional, risk every time you ride. That you're going to fall off, hurt yourself and potentially even die on one if you keep riding. It's as much a part of the package as your eyes or hands are a part of you. Motorcycles throb with life, thrill us, make our eyes shine and our hearts beat harder. They're vital to me and vital in nature. They're also dangerous.

Which means they may not be everyone's cup of tea. That's all right.

But if you do believe that motorcycles are for you, then you need to think your obsession through. Unlike painting or stamp collecting, motorcycles require more. Riding gear is an essential part of the game and you're going to have to work with the inconvenience of wearing it as much as possible  I'm never without it.

More importantly, motorcycle riding is a cerebral hobby that requires a great deal of mental acuity and training. If you're going to ride well and for a long time, a dip of the head in the waters isn't enough. And full immersion requires thought, concentration and most of all, a school and training and practice. You can leave the matched knickers and cape at home, they don't help.

Also read:
Why you should invest in riding gear
Death wish