The Attorney-general K K Venugopal has said that state governments cannot lower fines below what has been notified in the amended Motor Vehicles Act. This law came into effect on September 1 and has been notified by eight states since then, Odisha, Assam, Gujarat, Karnataka, Kerala, Uttarakhand and Manipur.

The ministry of road transport and highways had sought a legal opinion after some states who had taken up the law decided to lower fines to a level below what has been prescribed in the Act. This happened with the compoundable offences, as in the offences where the accused can pay the fine on the spot and be acquitted. The law has set a minimum and maximum range of fines for these offences, with the final amount being chosen at the state's discretion.

The 2019 Motor Vehicles Amendment Act recommends a minimum penalty for a general violation of Rs 500 that has been increased from Rs 100. Also, if you are found driving without a licence, you will be fined Rs 5,000 which has been increased from Rs 500. Further, driving in spite of disqualification will attract a fine of Rs 10,000 which was earlier Rs 500. The proposed law also mentions of a Rs 10,000 fine for drunken driving instead of the Rs 2,000 imposed earlier.

The 2019 Act also has provisions for automated fitness testing. It will be developing a system to offer cashless treatment for victims affected in a road accident, immediately an hour after the accident or mishap. This is the time period wherein the victim seeks critical medial support. A compensation of Rs 2 lakh or more will be provided to hit-and-run victims, up from Rs 25,000. In case a juvenile is involved in an incident, their parents/guardians will be held accountable unless proven innocent. A Motor Vehicle Accident Fund will provide cover to victims of accidents. Breaking speed limits and not wearing seatbelts can get you a Rs 1,000 fine, up from Rs 400 and Rs 100. Get caught using a phone or rash driving and you'll have to shell out Rs 5,000, up from Rs 1,000.

Manufacturers are also more liable now. Cars with sub-standard components or engines will have to be recalled, failing which a Rs 500 crore fine will be charged. Rounding of these changes is new insurance coverages. All road users now get compulsory insurance for certain accidents, but a 6-month time limit has been placed on claims. The Centre will also be developing a new long-term as well as medium-term framework wherein an integrated multimodal transport system will be formed and will offer seamless connectivity across urban and rural areas.

Illegal parking in Mumbai can burn a big... 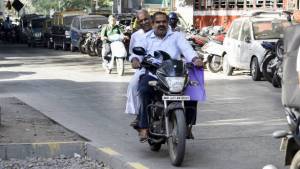