While most MotoGP fans were convinced that Valentino Rossi wouldn't retire at the end of the 2016 season, Rossi himself had declared that he'd wait a few races before deciding his future in the sport. However, just ahead of the Qatar MotoGP race, seemingly convinced of the fact that he will still be able to fight for wins, Yamaha has announced that Rossi has a new contract with them that will see him ride for the Japanese team till the end of the 2018 season of MotoGP. 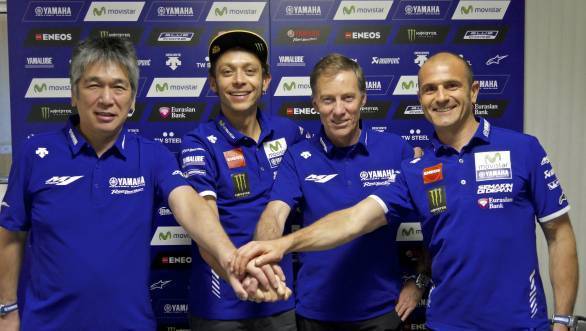 After signing the contract, Rossi declared that he was happy with his decision to continue with Yamaha, especially since his return to the Japanese squad in 2013 had given him the feeling that he was "home again". The fact that his results have steadily improved since 2013, Rossi even infamously fought for the title last year, is also proof of this. With four championship titles with Yamaha, and 53 GP wins, the next two years could see those numbers increase.

Meanwhile, Yamaha's Lin Jarvis said that the fact that Rossi has decided to commit to another two years in MotoGP, with Yamaha, is a sign that his passion is in no way abated. Jarvis also remarked that the contract that their 37-year old rider has signed is likely to be the last MotoGP contract he ever signs.

Now to see if Rossi can add another premier-class title to his tally. He's got three years to do it.