MotoGP has officially announced that seven races on the 2018 calendar will be shortened. This move is part of a two-year transition that is aimed at helping television broadcasters. The aim of reducing race distances is to reduce the variation in race duration between rounds and to play race day scheduling better. In addition, the limitations place on fuel and engine regulations means that the lengthening of race distances is not possible. 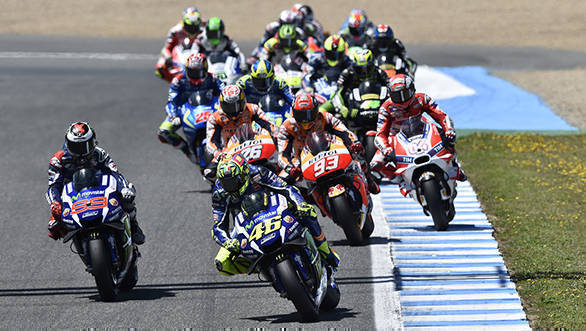 The seven races that have been shortened include the Americas GP, French GP, Catalan GP, Czech GP and San Marino GP all cut shorter by one lap. And the Spanish GP at Jerez is set to be shortened by two laps, while the Valencia GP will be shortened by three laps.

In Moto2 the Americas, French, Catalan, German, Czech, San Marino, Japanese and Malaysian GPs have all been shortened by one lap, with the Spanish and Valencia events now shorter by two laps in 2018. In Moto3 the Americas, Spanish, Catalan, Czech, Aragon, Malaysian and Valencia GPs are now one lap shorter and the French GP is now two laps shorter. While further race duration cuts will be made in Moto2 and Moto3, no further changes will be made in MotoGP for the 2019 season.

There is another change that has been made to the MotoGP sporting regulations for the 2018 season. When a race is red-flagged, if the red flag is shown after 75 percent or more of the race distance, the result will be declared, extending the earlier rule where the result would be declared if a red flag was shown at two-thirds the race distance. This, however, does not apply to the Moto2 and Moto3 championships.