Marc Marquez took a commanding victory at the German MotoGP round at Sachsenring. It is the Spanish rider's tenth victory at the race track, and has ensured that he is now in a strong position to win the 2019 MotoGP championship.

Marquez, who had clinched his tenth Sachsenring pole in a row on Saturday, moved into the lead of the race at the very beginning. En route his win at the track, he set a new lap record of 1min 21.228sec. Victory at the race also managed to get him 58 points in the clear of Andrea Dovizioso in the championship hunt. 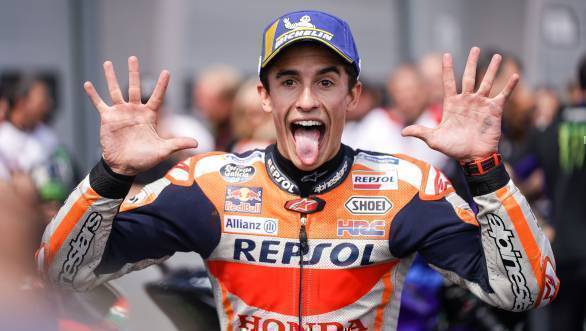 Marc Marquez celebrates his perfect 10 at the Sachsenring

From that point one, there was little that could trouble Marquez, who managed to maintain the fairly easy buffer he had over the chasing pack. This was headed by Maverick Vinales in second place. In fact it was Vinales who was under pressure, pursued by LCR Honda's Cal Crutchlow. The British rider ended up on the third step of the podium. 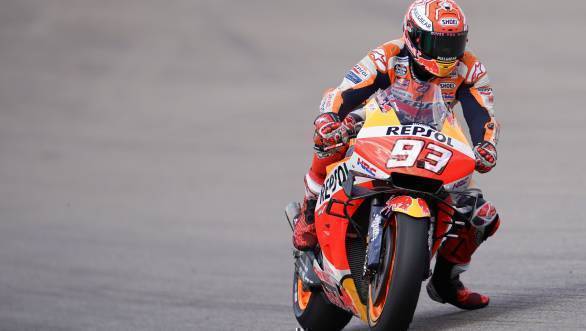 The fight for fourth place was between Danilo Petrucci, Andrea Dovizioso, and Jack Miller. In the end that's the order in which they finished, with the two factory Ducatis edging out the Pramac Ducati.

Seventh place went to Joan Mir, who had managed to run ahead of the Ducatis at one point, but unfortunately suffered a late race pace fade on his Suzuki. Eighth place went to Valentino Rossi on the second factory Yamaha, ahead of Petronas Yamaha's Franco Morbidelli. Stefan Bradl took tenth place as the replacement rider at Repsol Honda, standing in for the injured Jorge Lorenzo. 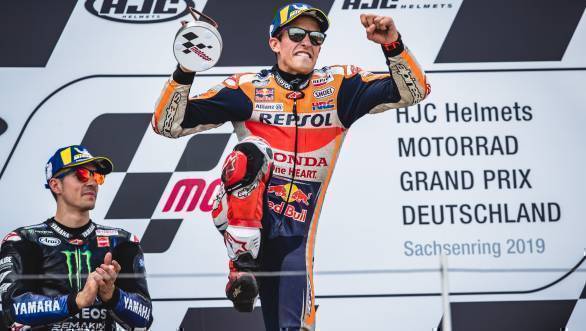 Marquez celebrates on the podium, as second-placed Maverick Vinales looks on

Heading into the summer break, Marquez sits at the head of the championship standings with 185 points. Andrea Dovizioso is second with 127 points, while Danilo Petrucci is third with 121 points.