Victory at a somewhat bizarre Argentina MotoGP race has ensured that Cal Crutchlow now leads the 2018 MotoGP championship. This makes him the first British rider to get to the head of the MotoGP championship standings since Barry Sheene in 1979. Finishing in second place behind the LCR Honda rider was Monster Yamaha Tech 3's Johann Zarco, while Alex Rins took third place for Ecstar Suzuki. 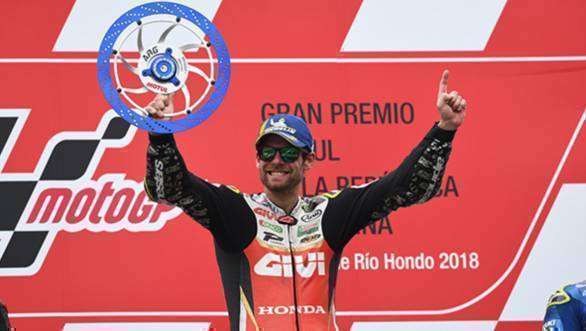 LCR Honda's Cal Crutchlow notched his third MotoGP win, with victory at the Argentina MotoGP round

There was further drama even before the race started, as Marc Marquez stalled his motorcycle on the grid, and then rode the wrong way down the track to resume his starting position on the grid. It would earn him a ride-through penalty, and would trigger a series of strange, some would say dangerous moves from the Spanish rider who seemed to be in a hurry to catch up. It would begin with a clash with Aleix Espargaro, that would result in a one-place penalty for Marquez.

There was a battle raging on at the front of the order though, with Crutchlow, Zarco, Rins and pole-man Miller scrapping for first place. While behind them Marquez was once again carving through the pack. However a move that saw him collide with Valentino Rossi at Turn 13 of the track, with just four laps left in the race, earned him a 30-second penalty. Marquez would end the race 18th, while Valentino Rossi, would remount his motorcycle and finish the race 19th.

Crutchlow's move into the lead of the race happened at the penultimate corner of the penultimate lap. Then it was up to Zarco, who'd been pushed down into second position, to try and recover the lead. But the British rider was fast enough to keep the Frenchman at bay. Crutchlow, on the LCR Honda, had the measure of Zarco, taking victory at the Termas de Rio Hondo. The win sees him go down in history as the rider who was responsible for Honda's 750th grand prix success. It was Crutchlow's third MotoGP win.