Marc Marquez took a fine victory at Phillip Island in Australia, extending his lead in the championship standings by a further 25 points over title rival Andrea Dovisioso. Marquez now head the points table with a 33 point lead over Dovisioso, who himself could only claim three points in the race, ending a miserable weekend in 13th place. 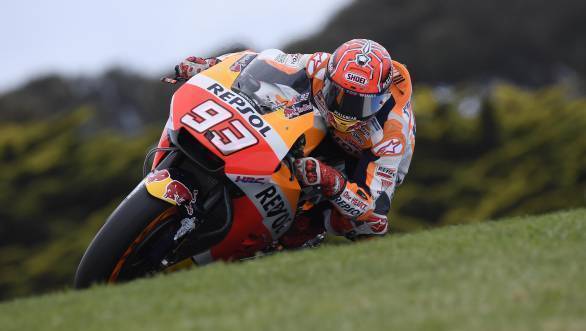 Second place in the race went to Valentino Rossi, who might be nursing an injured leg, but didn't let that stop him from overhauling Tech 3 Yamaha's Johann Zarco. It didn't end well for Zarco, who was ultimately overtaken by Rossi's team-mate Maverick Vinales, who went on to finish third.

While Zarco had to settle for fourth place, Cal Crutchlow ended the race fifth on his LCR Honda, ahead of Andrea Iannone on the best-placed Suzuki. Home hero, Australia's very own Jack Miller, ended the race seventh.

It was an exciting race, with the riders at the head of the order - Marquez, Rossi and Zarco - fighting for the lead and trading places several times over. Miller led the race after the first lap, with Marquez in hot pursuit, followed by the Yamaha's of Vinales and Rossi.

Meanwhile, further down the order, Dovizioso ran wide at Turn 1 during the second lap of the race, and dropped down the order to 20th position. From there on, it would be a hard race for the Italian rider, who had his work cut out for him in his climb up the order.

While Jack Miller led from Vinales, Zarco and Marquez tangled further down the order. This meant that Marquez dropped to fourth, while Rossi managed to make his way through. Zarco himself slipped down the order to sixth place.

Rossi, who had stalked Miller, then managed to move up into the lead, followed by Vinales. Vinales then went on to take the lead, before Rossi moved into first position once again. Meanwhile, Marquez had managed to get to third position.

The trading of places continued. Eventually both Marquez and Zarco, who'd already overtaken Vinales, would get past Rossi as well. Miller would make a move on the Italian as well, leaving Rossi down in fourth. But it wouldn't be long before Rossi would begin to fight for the lead once again, and claim his place at the head of the pack too.

While Rossi led, Marquez and Zarco traded positions, with Vinales leading the rest of the pack. Then, Rossi relinquished his lead to Zarco, with eleven laps left in the race. With nine laps left, it was Vinales who had managed to move into the lead. Marquez, in a bid to get ahead, ended up forcing Rossi wide, and then overhauled Vinales, and ran off at the head of the order, which is where he ended the race. Rossi managed to get the better of Zarco, and moved into second, while on the final lap, Vinales moved into third place.

Alex Rins took eighth place in the race, with KTM riders Pol Espargaro and Bradley Smith rounding off the top 10.