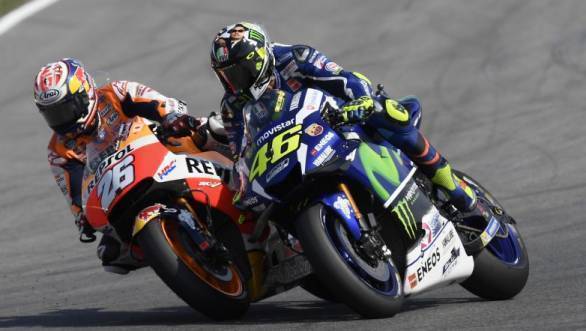 If there was one thing that fans at Misano really wanted, it was a Valentino Rossi victory. Unfortunately for them, that didn't happen, although they (the fans) took it rather sportingly, for it was Repsol Honda's Dani Pedrosa who took the win at San Marino.

In the early stages of the race, Lap 2 to be precise, it was Rossi who quickly moved into the lead, having muscled out of the way his Movistar Yamaha team-mate, and pole man, Jorge Lorenzo. Rossi retained this lead right up to Lap 22, when he was no longer able to hold-off the hard-charging Spaniard, Pedrosa.

Dani Pedrosa, who had started the race in eighth place, had managed to go progressively faster all through the race, first making a move on Marc Marquez, his team-mate to take third place. From there he stalked Jorge Lorenzo and managed to claim second. Soon he began to pile on the pressure on Valentino Rossi, chipping away at the lead that Italian home hero had built up. Pedrosa managed to get past Rossi, and open up the gap to 2.8sec before the chequered flag fell. He made his return to the top step of the podium for the first time since Sepang in 2015.

Third place went to Lorenzo, albeit a slightly aggrieved version of the defending champion, who deemed that Rossi's pass on him had been a little too aggressive for his liking. Marc Marquez finished fourth, and retains his lead in the championship, although now by just 43 points from Valentino Rossi.