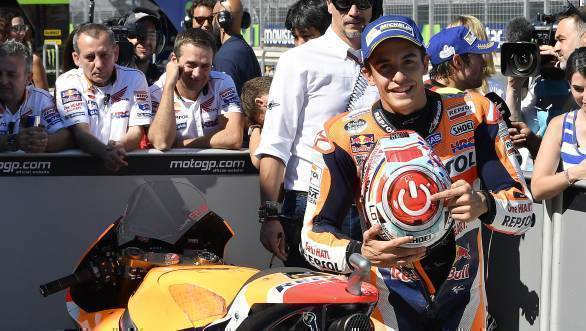 It was Marc Marquez all the way during qualifying for the MotoGP race at Aragon, with the Spanish rider claiming his fourth consecutive pole position at what is something of a home track for him. Marquez, who is currently in the lead of the MotoGP championship standings, set a timing of 1min 48.596sec.

Marquez was ahead of second-placed Maverick Vinales (Ecstar Suzuki), by over six-tenths of a second. The front row was locked out by defending world champion, Yamaha's Jorge Lorenzo.

The second row of the grid is headed by Ducati rider, Andrea Dovizioso in fourth, while Cal Crutchlow took fifth. Sixth place on the grid went to the second Yamaha of Valentino Rossi.

The third row of the grid is headed up by Repsol Honda's Dani Pedrosa, who qualified seventh. The second Ecstar Suzuki of Aleix Espargaro will line up eighth on the grid, with Danilo Petrucci ninth on the grid. Row four sees Scott Redding, Pol Espargaro and Stefan Bradl line up alongside each other.

Nicky Hayden, making a return to MotoGP to replace the injured Jack Miller, could only qualify 19th on the grid.