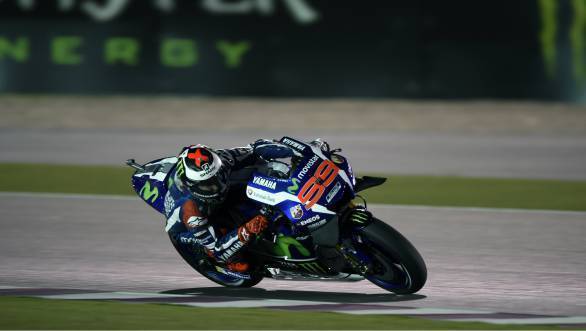 Jorge Lorenzo got his title defence off to a good start by taking pole position at the season-opening MotoGP round at Qatar with a timing of 1min 55.543sec. The Yamaha rider was expected to be fast, but that he managed the time that he did on his very first lap seemed to astound many, especially since the new Michelin tyres weren't expected to perform at their peak so early on in the session. Lorenzo's time was so good that it managed to survive at the top of the timing sheets all through the session.

Also starting on the front row in tomorrow's race is Repsol Honda's Marc Marquez. The Spaniard clocked a time of 1min 54.634sec, which puts him just ahead of Maverick Vinales astride the Suzuki GSX-RR.

Fourth place on the grid went to Andrea Iannone, while Valentino Rossi had to settle for a fifth-place starting position. Iannone's Ducati team-mate Andrea Dovizioso (who was on pole at Qatar last year) will start the race in sixth place, having clocked a time of 1min 54.963sec.

The third row sees Dani Pedrosa in seventh spot, ahead of Hecor Barbera and Pol Espargaro. Cal Crutchlow made it to the top 1o, astride his LCR Honda, followed by Bradley Smith and Scott Redding. Then followed Yonny Hernandez, Eugene Laverty, Aleix Espargaro - completing the fifth row of the grid. Behind them, row six sees Loris Baz, Alvaro Bautista and Jack Miller line up, with Tito Rabat and Stefan Bradl completing the MotoGP grid a row behind.