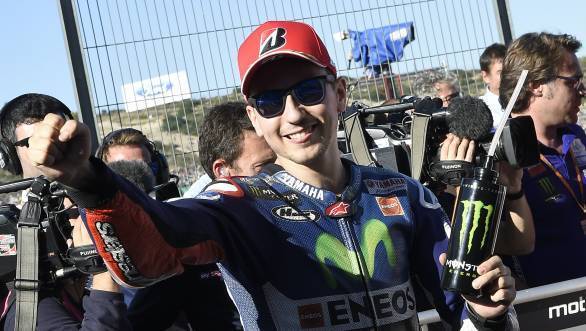 Jorge Lorenzo took a lights-to-flag victory at the 2015 MotoGP season finale at Valencia, winning him the 2015 title too

Jorge Lorenzo was on pole at Valencia. With his team-mate Valentino Rossi starting dead last at the season finale, it was always going to be a near impossible task for Rossi to win his tenth world championship title, but try his very best he did.

When the lights went out at Valencia, it was Jorge Lorenzo who got off to a terrific start, opening up the gap to the following Hondas. Behind him Marc Marquez and Dani Pedrosa set off in pursuit of the Yamaha M1. But most of the attention during the early laps was focussed on that other Yamaha M1. Rossi, who had started dead last, got off to as terrific a start as was possible for him, and made up several places on the opening lap. He then set about on a quest to move up the order and make his way through the grid, which wasn't entirely easy. But by the thirteenth lap of the race, Rossi had managed to make it all the way up to fourth place. It was just the two Hondas up ahead of him, and team-mate Lorenzo off in the distance.

As it would turn out, Rossi was behind Pedrosa by 12 seconds. And by the time the race reached the halfway mark, it was Marquez who was shadowing Lorenzo, while Rossi seemed like he was losing ground to the men up ahead of him. The only way for him to win the title from fourth place would have been if Lorenzo finished third. And that would only happen if both the Hondas got past the leading Yamaha.

The one man who looked like he could manage to play a crucial role in it all was Dani - in new stellar form after all his arm issues had been surgically sorted out. With five laps left in the race Pedrosa started closing in on Marquez, who was already close to Lorenzo. But when he finally made a move with merely one lap left in the race, he ran slightly wide, allowing Marquez to retain his second place. That allowed Lorenzo the gap that he needed to get away up ahead. He won the race by 0.263 seconds, which meant that he also took home his third premier class title, and his fifth world championship.

Valentino Rossi was fourth - a far away fourth at that - despite which the crowds seemed to be chanting his name in the grandstands.

MotoGP testing for the 2016 season begins on Tuesday at Valencia.