Following Michael Schumacher's skiing accident and cranial surgery that was performed at a hospital at Grenoble on Sunday, doctors held a press conference on Monday morning to apprise the world of his condition. While there were rumours doing the rounds on the internet that Schumacher had undergone a second surgery during the night, the medical team treating the seven-time world champion was quick to dismiss such rumours. They declared that no second surgery had been performed as his condition didn't require additional surgery at present. 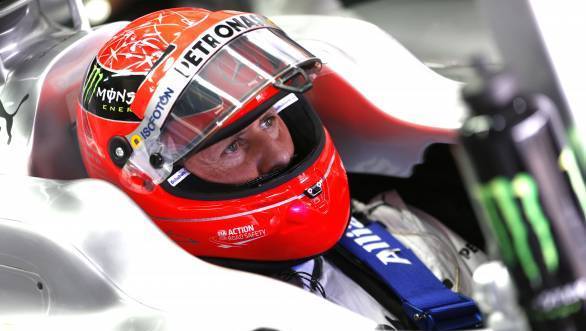 The chief anesthesiologist, Jean-Francois Payen declared that Schumacher suffered his accident at the right spot, because of which he received the best medical attention at the critical time in which it was needed. He went on to say that everything that could have been done for the former F1 driver had already been done, and there was no update on how his condition would progress. Professor Payen also indicated just how serious the German's condition was when he declared "We can say that he is fighting for his life." It was also mentioned that had Schumacher not been wearing his helmet, he would not have been around at all.

A spokesperson for the hospital declared "The neurosurgical treatment he received brought us quite a lot of information. We had to operate urgently to release some pressure in his head. Unfortunately, he has some lesions within his brain.". The spokesperson also stated that when Schumacher had arrived at the hospital, he had been in a very 'agitated condition', going on to say that his injuries had been critical.

Schumacher is currently being kept under the influence of anesthesia to ensure that further impact is prevented. The duration for which he will be maintained in this induced coma hasn't been revealed though.

This isn't the first time Michael Schumacher has been injured in a crash that doesn't involve a Formula 1 car. Three years after Schumi retired from Formula 1 at the end of the 2006 season of Formula 1, he suffered an accident on a Honda Fireblade in Cartagena, Spain, in which he damaged his vertebrae. This also led to him having to cancel plans to make a Formula 1 return to replace the injured Felipe Massa in 2009. Of course, Schumacher made a full recovery and returned to competitive F1 between 2010 and 2012. And it is this resilience of his that has led so many of his Formula 1 colleagues to declare that they believe he will make a full recovery soon. We certainly hope they are right. Watch this space.