Self driving cars are the future and most big manufacturers are actively developing autonomous vehicles. Mercedes-Benz however has just conducted a fully unmanned test drive of an autonomous truck on a 30km stretch of autobahn near Magdeburg in Germany 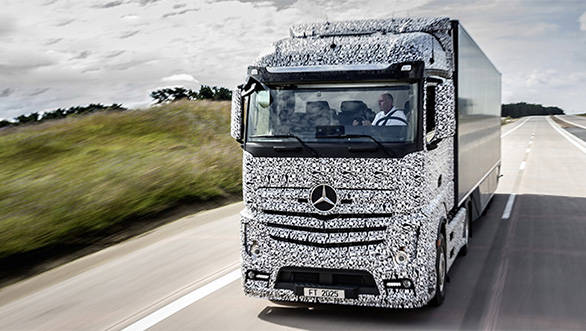 The 'Future Truck 2025' uses a system Mercedes calls Highway Pilot that enables it to drive fully autonomously up to speeds of 85kmph. The company says that Highway Pilot can be best described as an autopilot for the road. Like autopilot, the system can be manually overridden when the truck comes up to overtake another vehicle. The system also has what Mercedes-Benz calls 'Predictive Powertrain Control' that scans the road ahead to keep the engine and gearbox primed for what lies ahead. This feature joins technology that is already available in current Mercedes-Benz trucks like proximity cruise control, automatic braking, stability control and lane-keeping assistance systems for a more autonomous experience.

Mercedes-Benz plans to have a further developed version of the Highway Pilot technology ready for production heavy vehicles by 2025.

Mercedes-Benz witnesses its highest ever...
Advertisement