After plenty of teasing and speculation, Mercedes-AMG has finally revealed the hardcore version of its flagship model, the AMG GT R. Finished in a fetching shade of green and dubbed 'AMG green hell magno', the Mercedes AMG GT R was first teased on earlier this month with a public debut scheduled for June 24 at the Goodwood Festival of Speed. As you might have guessed from the name of its colour scheme, the AMG GT R saw its development take place at the Nurburgring Nordschleife. 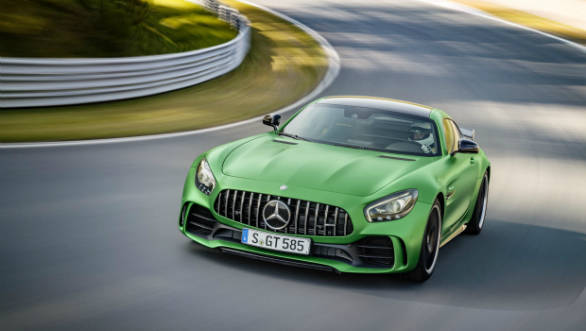 The Mercedes AMG GT R is powered by the same 4.0-litre twin-turbocharged V8 seen in the relatively tame AMG GT. However, power has been cranked up to 585PS at 6,250rpm and 700Nm of torque at 1,900-5,500rpm. Power is sent to the rear wheels via a 7-speed dual-clutch transmission. A lot of work went into weight reduction, with plenty of carbon fibre used throughout the track-focused car. As a result, the AMG GT R is lighter than the AMG GT S by a good 15kg. All of this translates into a 0-100kmph time of 3.6 seconds and a top speed of 318kmph. 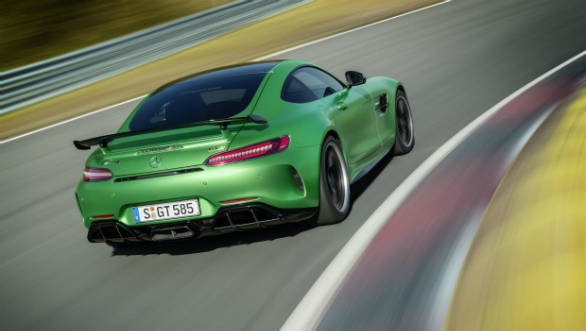 The AMG GT R features various elements derived from the AMG GT3 racecar, including the fixed rear wing, vertical fin grille and the double diffuser. These elements set the AMG GT R apart from its street-oriented cousins. The green paint scheme is sure to turn heads, if not the aggressive body curves.

Plenty of work went into improving handling as well, including rear-wheel steering. On the aero side of things, the Mercedes-Benz AMG GT R features active aero on its underbody which automatically activates at speeds over 80kmph when in Race mode. The radiator also aides in guiding air to the rear double-diffuser, thus aiding downforce.

Bookings for the Mercedes AMG GT R start on November 21, 2016 with deliveries commencing in March 2017 in Europe.