The new Harley-Davidson Street 750 is the first of a new line of motorcycles, labelled the Street line and likely to be the new entry-point into the Milwaukee-based motorcycle manufacturer's product range. In effect, the Street line displaces the Sportster as the traditional entry point into Harley-Davidson. The Street is their first all-new platform in nearly 15 years and is the first time a motorcycle is being manufactured outside the USA in the brand's history. What an all-new platform means, is a new engine. This one is christened the Revolution X. The Revolution X is a 749cc four-stroke engine that is configured as a liquid-cooled 60-degree V-twin with chain-driven single overhead camshafts (one per cylinder) operating four valves each. Keeping with the current trend of friction reduction equipment, the RevX also gets roller rockers with screw adjusters. At the bottom, the new engine has a vertically split crankcase with plain bearings. While a lot of work on this engine was done by AVL, this construction format is actually very similar to the V-Rod which came in 2001 bearing a huge Porsche influence as Harley's first liquid-cooled engine and motorcycle.

Harley set aside many of their traditions for the Revolution X. For example, the 60-degree included angle of the V - 45 is the traditional angle - was used to lower the height of the wet sump engine. This is crucial to creating the low seat height. Since Harley intends to sell this motorcycle to new riders as well as in Asian markets where inseams are typically shorter, this is important. It also lowers the centre of gravity which makes the handling better and low speed feel more secure and stable, all critical elements for new riders to be able to find confidence in their machines. 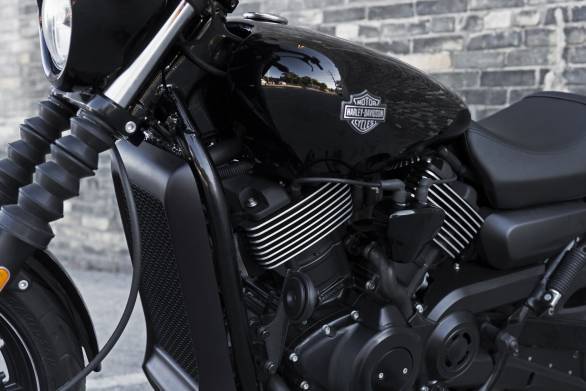 Above the crankcase are two separate aluminium cylinders with iron cylinder liners. In fact, the sole difference between the 500cc and 750cc versions of the Revolution X is the bore. The 749cc uses a 85mm bore while the 500 uses a 69mm bore. Both share a 66m stroke. This is clever, cost-effective engineering. But the similarities also give both motorcycles the same 8000rpm redline with the 750's peak power likely to be just under 55PS at about 7500rpm. However, Harley never discloses their actual power figures. American magazines which dyno-ed their Street 750s report 52-53PS at the rear wheel. Torque is claimed to be 65Nm at 4,000rpm, which promises quick acceleration as well as the typical rideability that Harleys are famous for.

Harley have also used a single balance shaft to ensure that outside of the vibes needed by their cruisers for the feel, the Street 750 is a smooth motorcycle. The engine is, of course, fuel injected. Feeding the cylinders is a single 38mm Mikuni throttle body

The engine is matched to a six-speed transmision and as is the norm for Harleys, the final drive takes form of a toothed belt. Harley says belt drives have numerous advantages including very low maintenance and no final drive slap.

Harley will build the 750cc Revolution X in India and currently the Indian 500cc plan is on the back burner. The Street 500 is being built at the Harley plant in Kansas City for domestic consumption in the USA. Harley India will export the Street to three European countries initially and export plans for the rest of South-East Asia will come on stream shortly. It is at that point that we might get to see the commencement of the Indian manufacturing of the Street 500.