On December 28, 2015 Marc Marquez released a video of himself doing a perfectly executed backflip on a dirtbike. Fans and haters equally were awed. Is there nothing the young riding genius can't do? However, a few days later Marquez revealed that the video was actually a fake, a prank set up to celebrate 'Dia de Los Santos Inocentes', or the Day of the Holy Innocents, a Spanish version of April fool's day.

The ruse was very carefully carried out. Marc who was riding a four stroke-motorcross bike jumped off the ramp at the side while freestyle motocross rider Dany Torres on a two stroke motocross bike was the one who actually made the jump. The original video was so well made that its almost impossible to catch it. If you squint hard enough, you'll see the larger expansion chamber on the two stroke bike in the air.

Full credit goes to Marquez's acting skills, he really sold the emotion of managing the feat in the original video. Next time you see him smile graciously at the camera and say he's happy with second spot, you'll know better! 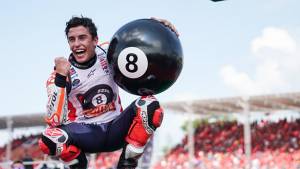