The 2016 Mahindra Centuro has been unveiled in a new guise. As a part of upcoming movie release, the special edition of the motorcycle will be called the Mirzya. The bike will only feature cosmetic touches like the golden graphics on the sides of the bike. The alloy wheels on the Mirzya will be the same ones that the Centuro uses. As seen in the image below, the Mirzya uses drum brakes. Mahindra has not confirmed if a disc brake variant of the Mirzya will be available in the future. 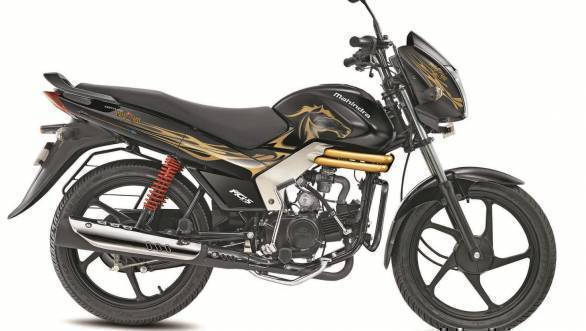 The Mirzya will retain the MCI-5 engine as on the Centuro which adapts to the terrain as it rides to increase the mileage and pick-up. It produces 8.5PS of power from its 107cc air-cooled single-cylinder engine, which is mated to a constant mesh 4-speed manual gearbox. The bike will retain the anti-theft system that the Centuro uses along with the remote-flip key and engine immobiliser.

The gold bars under the fuel tank, which are an eye-sore on the Centuro, seem to go pretty well with the gold graphics on black body of the Mirzya special edition. It is unclear if Mahindra will offer other colours on the special edition, or whether it will be just available in black.

With pricing not yet known, the Mahindra Mirzya will go on sale from the first week of October, alongside the Centuro. The latter's price ranges from Rs 46,890-52,890 (ex-Mumbai), so it should be safe to assume that the Mirzya will be priced closer to this. Mahindra has confirmed that sales of the Centuro Mirzya will continue till there is a demand.