Tata Motors is all set to launch the Tiago NRG in India. NRG, that stands for 'energy' is a crossover based on the regular Tiago hatchback. However, the Tiago NRG will not just get rugged cladding but will also get improved ground clearance and tuned suspension to make it more capable over the Tiago. In addition to the distinct styling, the Tata Tiago NRG is also expected to get a new touchscreen infotainment system with iPod connectivity. Tata will offer the Tiago NRG with a 1.2-litre petrol or 1.0-litre diesel mated to a 5-speed manual gearbox. We expect the pricing of the Tata Tiago NRG to be competitive as the new offering from Tata Motors will take on the Maruti Suzuki Celerio X in India. Stay tuned to OVERDRIVE to get details like the launch price, variants, specifications as well as features offered. Know everything about the Tiago NRG in our launch article here

The Tata Tiago NRG is powered with an option between the 1.2L Revotron petrol engine and 1.05L Revotorq diesel engines. The state of tune remains unchanged from that of the Tiago hatchback.

The Tiago NRG is priced at Rs 5.53 lakh, ex-showroom Mumbai for the petrol and Rs 6.38 lakh ex showroom for the diesel model.

The cabin gets active all black interiors with canyon orange highlights and Denim inspired seat fabric. 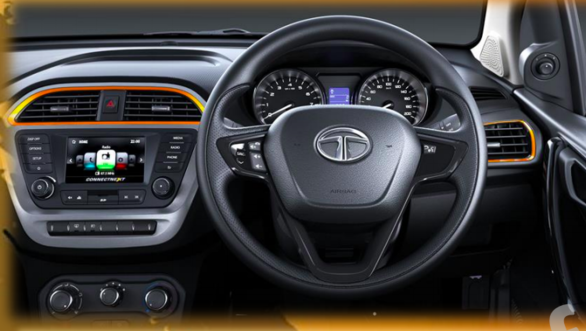 The NRG receives a black body kit, that includes two-tone front bumpers as well as integrated silver scuff plates, side skirts and cladding around wheel arches as well as tailgate. The grille, roof, mirrors, and B-pillar get blacked out treatment. Tata Motors launched the Tiago in April 2016 ad has sold over 1.65lakh units with a large majority of them being the top end variants.