LaFerrari to be showcased at the annual Parx Supercar Show 2015

The RWITC in Mahalakshmi, Mumbai is all set to host the seventh edition of the Parx Supercar Show from January 10 to 11, 2015. An annual congregation of supercars, the show serves as a destination for owners of automotive exotica to bring out their enviable machines from the garages and for motoring enthusiasts to feast their eyes on said exotica. Cars from the stables of Audi, Mercedes, BMW, Ferrari, Lamborghini, Porsche and Rolls-Royce will be gracing the show.

The main attraction, though, will be the uber rare Ferrari LaFerrari. Limited to just 499 units, this critically acclaimed supercar is the only one of its kind in India at the moment. The hybrid car employs an F1 derived HY-KERS system that produces a whopping 960PS, of which the V12 engine makes 800PS while the electric motor generates the remaining 160PS. The top speed is on the other side of 350kmph.

The cars will also be driven in the now customary supercar parade on the streets of Mumbai on January 11. The route would begin at the Turf Club, crossing major landmarks in South Mumbai including Haji Ali, Chowpatty, Marine Drive,  Nariman Point and the Sea Link, leading all the way back to the Turf Club.

At the announcement ceremony, Gautam Singhania, CMD, Raymond Limited and founding chairman of Supercar Club, said, "It gives me immense pleasure to host the seventh edition of the Parx Super Car Show as it offers car enthusiasts an opportunity to witness some of the best supercars in the country. This year we are delighted to showcase LaFerrari for the first time in India, and we are confident that it will be a visual treat for all car fanatics. It's encouraging to see that with each passing year, the popularity of the show is soaring by leaps and bounds, and we are confident that this annual fiesta will only become bigger and better in years to come." 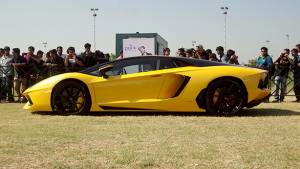