This image of a supermotard clearly based on the KTM Duke platform has appeared on an European KTM forum. KTM CEO Stefan Pierer has often spoken of the company's plans with Bajaj Auto revealing the nakeds (already out), the sports bikes (coming to Auto Expo most likely) and the enduro bikes (likely late 2014 or early 2015). But a supermotard has never been mentioned.

Historically the supermotard format was a delicious confection born from the addition of street wheels (going from a spoked 21 front/19 rear to an alloy 17 inch set), tyres and a bigger front brake to a dirt bike. They were raced on part-dirt and part-tarmac courses. They have also proved to be exceptional urban demons using their skinny dimensions, tall seating and instant turning ability to great effect. 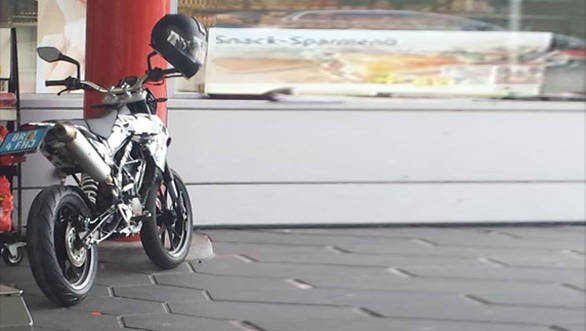 So why is KTM doing a Duke supermotard? First it's easy to make. If you're already at work on an enduro you've already got most of the suspension work sorted out. Swap the wheels, tyres and brakes and you're set. Second, India has shown so far an extreme reluctance to spend money on both off-road motorcycles as well as motorcycles that look like they could be off-roaders. Spreading the risk across two similar to make and engineer models is just good for business. 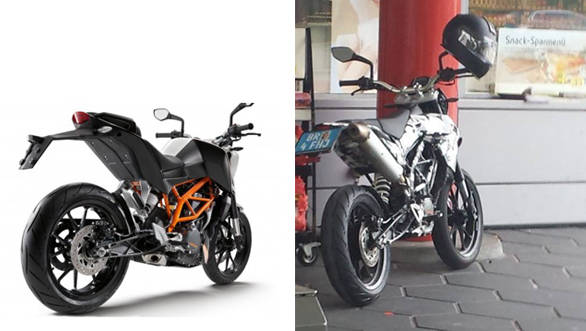 If you look closely at the image you'll spot some of the details. The bike is clearly wearing the same rims as the ones we get on the Duke so in production form I expect to see the same MRF/Metzeler tyres as the Dukes. However the front USD fork is clearly longer with more travel as well as a dirt-bike style fork protector. It isn't fully clear but it looks like the steering geometry has been relaxed a bit as well.

The bodywork clearly owes more to dirt bikes while the same trellis frame is clearly visible. On this bike the indicators are identical to the Duke and the shape of the head light fairing looks the same as the Duke. Also identical are the mirrors, grips, levels and switchgear. The handlbar is similar but has a bigger rise in the bend.

Note the long flat seat that almost runs to the handlebar - this is critical in allowing the rider to place his or her weight on the motorcycle to make the most of whatever traction is available.

At the back there is a small LED tail light and what looks like an aftermarket exhaust very much in mounting and shape a dirt bike-style element. The white rear mono shock will have more travel as well. But these are just the bits. The real juicy bit is the new swingarm angle which leads to a higher overall ride height as well as far greater ground clearance.

What this also means is that if you squint and imagine a bigger spoked front wheel, smaller front disc and a bigger (also spoked) rear wheel with knobblies, you might get a sense of what the enduro motorcycle coming off this platform might look like.

The other thing it means is that at least two people at OVERDRIVE have just put their plans to buy the Duke and RC390 on hold to sit and wait for the KTM 390 SM to get launched.