The KTM 390 Adventure has been spotted testing and the excitement is at fever pitch. OVERDRIVE broke the story confirming that the KTM 390 Adventure project was back in motion and that the motorcycle would be presented in 2018 as a 2019 model. Nothing we see changes that although Cycle World has said that they believe the project looks so far down the road that the motorcycle could debut at the 2017 motorshows and go on sale in 2018. I wish, but I don't think so. But first, let's talk about what is visible in the spy shots. 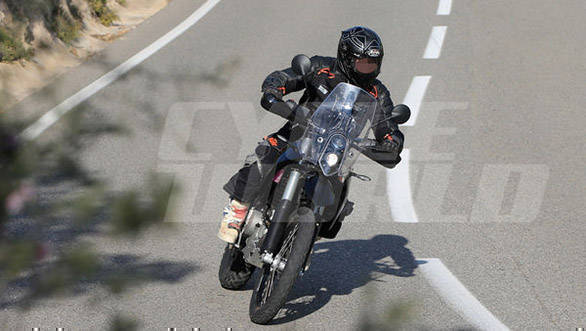 Discount the presence of the navigation tower on the prototype. No manufacturer ever includes it in the production spec of the motorcycle. The tower is a simple set of plates mounted to the headstock which allows additional equipment to be mounted. In all probability, KTM engineers found it convenient to mount readouts from telemetry units for prototypes.

Although clearly a single-cylinder engine, is it the KTM 390 engine as we know it? Or as on the 2017 KTM 390 Duke which gets a refreshed engine? There seems to be some doubt. The report from Motorcyclist believes that while this is definitely an Adventure-series motorcycle, it could be something larger than the 375cc engine from the Dukes. To wit, KTM's biggest single-cylinder engine is the 650cc single in the 690 series, and this could easily be the new 690 Adventure testing, if you think about it.

The upshot is that this could be the 390 Adventure or the 690 Adventure out testing. But we do have clear confirmation from Intermot that the KTM 390 Adventure is moving towards production with the final-spec expected to be on display at the 2018 motorshows. Nothing I see here changes that. I would just ignore the lines. A closer look reveals that the tank is basically welded steel panels, the headlight cluster and the fairing is a lash-up, and the body panels are basically zip-tied to the frame to cover the mechanicals. There is not a single panel here that I can confidently state indicates what the final motorcycle might look like.

On the flip side, the presence of lights, a Euro-IV compliant-style exhaust et al, says the bike being developed is clearly intended to be homologated for road use. Motorcyclist reports that an on-road as well as off-road configuration has been spotted testing. If this is indeed the 390 Adventure, this might suggest that KTM is planning a 390 Adventure and a more hard-core 390 Super Adventure just like the top of the Adventure line does.

The chassis is the most revealing thing on the prototype. It's a simple trellis as KTM likes to make them with a flat, featureless swingarm that, to me, will mimic the length and dimension of the final swingarm, but this one is just a prototype being used for testing. The suspension does seem to have extra travel and the frame has be new - look at the ground clearance versus the seat height. There is no way a Duke frame can allow KTM to achieve this proportion. 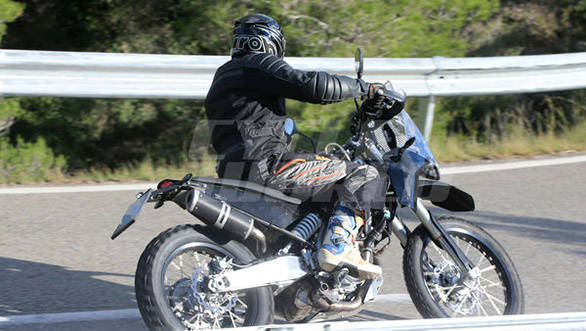 There's some doubt as to whether this is the 390 Adventure prototype to our minds. But if we assume that isn't something else, it still doesn't change our expectation that this bike is set to be a 2019 model when it comes to going on sale. KTM will launch the 2017 390 Duke shortly, and we expect the all-new RC390 to show up towards the end of the 2017 and go on sale early in 2018.

We do expect significant changes to chassis geometry on the 390 Adventure as well as the arrival of long-travel suspension that will handle light to moderate off-road riding. It is easy too early to talk about pricing but given the significantly larger size and the sophisticated (read expensive) suspension, I would expect to pay Rs 40,000-odd more than the RC390 for the 390 Adventure. 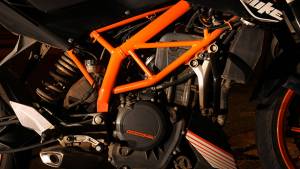