The Jaguar XE has been seen testing a lot and the British company isn't exactly making it difficult for us to see what the finished product will look like. The car will be  positioned under the current XF range and will be a competitor to BMW's 3 Series, Mercedes-Benz's C-Class and Audi's A4.

Jaguar showed off the XE mule which is likely the pre-production one on its Twitter feed. The car will be revealed in its production form in October this year at the Paris Motor Show. The mule shown on Twitter has a transparent body showing its internal construction nonetheless, this is the first time the production shape of the XE has been shown to the public. As part of Jaguar's new PR campaign in a bid to generate more publicity through social media for the car, every following mule will sport the 'FeelXE' Twitter hashtag. 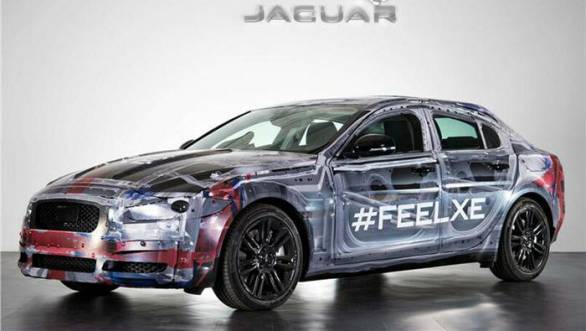 The mule and previous frontal shots of the XE show that the car will maintain the trademark Jaguar looks and will come with an all new rear-wheel drive and four-wheel drive all aluminium chassis. The company also hinted at a full line-up of the XE with their new Ingenium engines which will be both 'powerful and efficient'. These engines will eventually  replace the old engines currently in use in Jaguar cars.