Laurent Frégosi is Citroen Racing's Technical Director and is in charge of their WRC programme. He oversaw the technical side of the final year of Citroen in the WTCC in 2016 and has considerable experience from working on projects such as the Xsara WRC, the C4 WRC, the DS3 WRC and the C-Elysee WTCC. He explained that work started on the 2017 World Rally Car around April 2015.

Laurent Fregosi: When we began work there were very few people in the design department, originally only two people, then three. We didn't begin with the full potential! We progressively increased the workforce from September 2015, with everybody working on this project. The car is completely new compared to DS3 WRC. We have kept some philosophies, and even if a lot of parts are completely new we have retained a lot of ideas on the DS3, though at the end we redesigned all the parts. 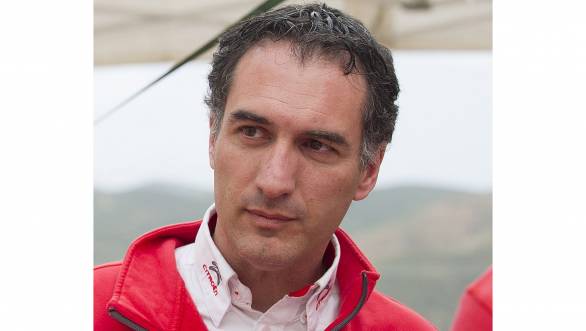 MH: How many test cars have been built?
LF: We began with one test car in April this year (2016) then in July we introduced a second test car. Since this date we have done each test session with one car. Since July 2016 we have two test cars. We do one test with one and the test afterwards with the other.

MH: Has aerodynamic work been the biggest challenge in this project?
LF: It is difficult to say the biggest challenge, it is one of the challenges, one of the main differences, so we have done a lot of work in aero. What has been quite difficult is to define the good shape from the aero point of view which we would be able to maintain all through the rally. I am talking about damage to the car, especially losing some part of the front bumper. It has been difficult to find a good compromise between the effect of damage and the aerodynamics of the car.

MH: How much benefit in the rally car has been the experience in Touring Car racing in aerodynamic work?
LF: The work we have done in Touring Car is not the same because the basic shapes of the cars are different. With aero you cannot transfer something from one car to the other because its very dependent on the shape of the standard car and on the freedom you have with the regulation, which are quite different between the WTCC and the WRC. The basic objective of the aero work in both cases is the same, getting more downforce without creating too much drag.

MH: Moving on to transmission and the re-introduction of central differential system, have you been using experience from the old Citroen days when they also had central differentials?
LF: The philosophy of how the central diff is working is quite similar between the new C3 compared with the old C4 on the mechanical way. We began with the same strategy for the C3 as with the C4, but we also have a new idea we have implemented in the software to gain more actuation in the way we'll adapt the pressure on the central diff. We have developed the gearbox and the rear diff with Sadev.

MH: You had many different test sessions. What was the priority in the test work, was it gravel, was it endurance, was it asphalt. What was the first priority for testing?
LF: The priority was on gravel surface because there are more gravel rallies than asphalt rallies, so it is more important to be able to run with gravel configuration. The other reason is that for reliability gravel is harder than tarmac, so to be sure to discover problems of reliability, it was more important to start off on the gravel.

MH: What is the history behind the engine?
LF: Because of the WRC regulation change we had to change a lot of parts on the engine but using the experience we have had on the WTCC engine, which had very similar regulations as the WRC for 2017. We take experience from both WRC and WTCC. We also improve with some new ideas that we have had and which we have experienced on the dyno, then we redesign parts of the engine for the new car. The 2017 rally engine is not exactly the same as what we had in WTCC.

MH: Engine work with the new regulations has presented another challenge, because you are now using engines with bigger restrictor in rallies, so has your experience on the racetrack with bigger restrictors helped with the development of the engine?
LF: It has helped especially because we have made a new engine. In making a new engine we have taken experience that we have been able to improve and implement in the engine of the WRC car. The pressure of the turbocharger is the same as we had on the old DS3 WRC car, the only difference is because we increase the diameter of the restrictor. So our aim with the engine management is to have good response on the exit of a corner, but having more power doesn't change the WRC car a lot. The consequence of having more power with the same torque, maximum torque, is that we are using the engine at the higher revs than the older car.

MH: What unexpected problems have come in the development of this car, something you didn't expect would be a difficulty?
LF: One of the problems was how not to damage the front and rear bumper. We had also some problems of transmission with the driveshaft. That was something we had not expected but they were not big problems but problems we have been able to solve. I have to say that we have never had the big problems that we have to stop test session. We have always been able to run because we never had a big problem with reliability. It was a good thing to be able to make a lot of kilometres for each test session, no big problems. We have had to modify the shape of the car several times, because we were also doing some simulation work until very late, not helped that some elements of design in the regulation were defined very late. The aim was to ensure that whatever problems we have will not stop the car and every time we changed the shape we had to be 100% sure we would not increase the risk of damage to the bumpers, the front bumper especially.

MH: How many rally cars will be built this season?
LF: We will have two cars built for each driver, two cars for each of the official drivers and one car for Khalid (Al Qassimi), so a total of seven. We are also expecting sometimes to run four cars.