Interview: KP Aravind on the challenges of preparing for his second Dakar outing

KP Aravind has had a fairly long career in the world of off-road motorsport. But his ultimate dream of competing in the Dakar, became reality only in 2017, when he joined the Sherco TVS Factory Rally Team. Of course, even though he didn't finish the 2017 Dakar, Aravind's impressed everybody since, coming up to speed very quickly and also managing to bring in solid and consistent results. Here he speaks of what it was like to compete in that first Dakar, his preparation ahead of Dakar No. 2, and what he expects from his second outing at the world's most gruelling off-road rally raid. 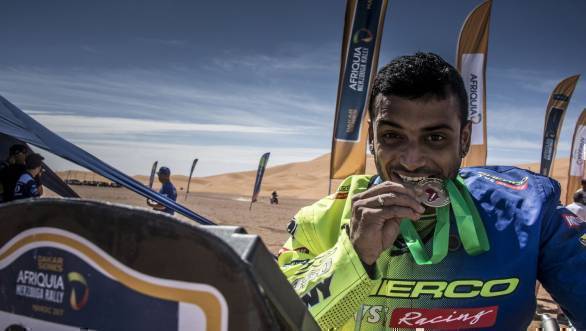 Here's KP Aravind biting on his medal from the Merzouga Rally. Hopefully it will bring him luck as he tackles Dakar No.2

On the daunting nature of the Dakar
Yeah, definitely it's a scary thought. Because I wanted to do it, it's not that I would run away from it. But the magnitude, the size of the race. The level of racing is all "next level". It definitely got into my head, but there was a lot of mixed feelings, I should say.

On his first attempt at the Dakar, and the results it brought with it
Definitely a disappointing one. Not one that I was looking forward to Nevertheless, it's a shame that I could not finish, and experience it first hand on the bike. Nevertheless, I was part of the team, and I went through the Dakar just to understand how it works, and to see my team-mates - how organise themselves. This gave me a lot of inputs and experience, to learn from. Which is actually showing in the world rally series also. And I am a better rider now. Just being there made me realise a lot of things, where I was wrong, what I had to implement, what I had to improvise, so it definitely gave me a lot of experience.

On his learnings since that first attempt at the Dakar
I would not back down on agreeing that I was unprepared (for his first attempt at the Dakar). But you know the Dakar, is the Dakar. How much ever you prepare you are not really prepared for it. I think now, the (learning) curve is really really high. Personally, I feel really really confident. I am aware of what I am heading into. Because this year (2017), when I was going into the Dakar, I knew what it was, but I never had any experience with it. But this time, I am prepared. I know what I have to deal with and I think I am in a better mindset and I'm in a better physical state also.

On the challenges he's faced within the learning process
No, it is not easy. Every day is challenging. Every roadbook is challenging. Every day is a challenge. It's not that I go there, cruise and come to that position. But it was very, very hard initially. But now it's on a slightly easier path. I think you never stop learning every day. The nature of the rally is such that they will not let you be comfortable on any day. So there is a lot of learning every day that you have to do. You have to implement what you learn, and cope with new things, and get better every day.

On the all-important roadbook
The roadbook was a big, big surprise for me when I started. Initially, it was very hard, but I spent a lot of time this year doing roadbooks in Spain and France. And I've had four international outings where I've used roadbooks. So I am in a much more comfortable state, where I can read the roadbook, and match the roadbook better than ever before. So it's definitely been hard, but like you said I'm a fast learner and I'm pretty fast at learning new things so it's been pretty good.

On his training regimen in the run-up to the 2018 Dakar
A lot has been changed since my Dakar visit. Everything is different. Nothing is the same in how I was preparing for this year's (2017) Dakar. Next year's Dakar I'm more prepared. I've got more bike time. I've had more navigation training. I'm physically better, I'm mentally better, I'm more confident. So everything is falling into place. I'm feeling better. There are different things I do. I ride three days a week, I train high-intensity interval training three days a week, I do a little cycling here and there. And I do some boxing, some squash, badminton. It's a mixture of a few things, every week it kinda changes. And my trainer makes it a lot of fun, than just being bored doing the same things. There isn't really a particular regime that I follow, but it's interchanged and mixed with new stuff.

On the dynamic within the team
That (the team) is the best thing that has happened to me. Because both my team-mates are very experienced in rallying. Joan, it will be his 10th Dakar, next year. And the third Dakar for Adrien. And I train mostly with Adrien. I keep getting inputs, it's definitely been a long way of learning since I started getting into international rallies. I was unaware of a lot of things. But they (my team-mates) are very very open to helping with ideas. And every stage, before I get into any stage, they give me tips. What I have to do. Where I have to charge. Where I have to relax. And if there are any major things that concern them. I have the best team-mates in the world, I should say.

On his goals for the 2018 Dakar
Finish. Finishing is my victory. Finishing is like finishing first for me. I have zero pressure. I have no point to prove to anyone. And my team just wants me to have fun, and that's what my primary goal is also. I just want to get to the finish line every day. And have fun on the bike.