Interview: David Casteau on the expectations Sherco TVS has from their fourth Dakar attempt

The 2018 edition of the Dakar Rally goes from Peru, through to Bolivia, and then to Argentina. David Casteau, the team manager of Sherco TVS, spoke to us ahead of the team's fourth attempt at the event. He talked to us about the team's learnings from previous editions of the Dakar rally, the level of preparedness of the team's three riders, and the challenges that the route of the 2018 edition might pose for the team. 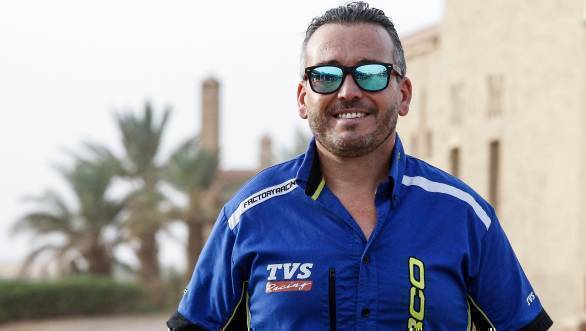 On the learnings from previous Dakars, and key areas of development based on this
Dakar is a true test of the man and the machine. Our engineers work with TVS Racing and go through experience of preparing the bike for racing in one of the world's most tough rally terrains and understand intricacies of the ride. This helps us give inputs for manufacturing our own off road motorcycles. In fact the development of the recent Dakar motorcycle RTR 450 FX is the result of accumulated experience in rally raid by the technicians and the huge development work done by the engineers over the years at Dakar. All this technological and human investment has helped to increase the engine performance and reliability as well as providing updates in the ergonomics, lightness and a more rigid chassis to provide our riders with a machine that makes its colors among the world's best. The experience of having a TVS race engineer with us on the third year in the race, and especially the factory in France, has allowed us to have their perspective as well on developing the bikes. With the participation of an Indian rider at international rallies we have been able to evaluate the expertise of Indian riders at international rallies and help them with training and technology on their racing bike needed to excel.

On the team's three riders - Joan Pedrero Garcia, KP Aravind, and Adrien Metge
We have prepared all three riders and are focusing on them equally. It has to be a team effort and good coordination between all three riders can help us perform well. All three riders have different skill sets. Joan with his experience at Dakar will push his limits and try and improve his timings so that he gets to the top-ten slot. Adrien on the other hand will also focus on improving his ranking than last year. Aravind has kept a goal of being able to finish Dakar this year so that he understands the extreme terrains and weather conditions that would help him prepare for future. As a team, they have a combined goal of improving their performance at Dakar over last year.

On KP Aravind's development as a rider
Aravind has been training very hard with the team this year. We have ensured that he gets exposure to various international rallies this year. I can definitely say that he has pushed himself harder and we have also worked very closely with him to help him train in navigation, reading road book and working on physical fitness. He has definitely taken our feedback at every stage of the training and is improving every day. He is a good rider so we didn't have to work much on his riding skills. He has been performing very well at international rallies this year and we are confident of him performing well at Dakar. We don't compare riders in our team. They are all different individuals and have their own style, strength and weakness. Our task is to train all of them and work on a strategy to utilize best of their skills so that the team gives a very good overall performance at various events.

On the challenges the 2018 Dakar route might throw their way and modifications on the motorcycle specific to the route
Considering that the rally returns to Peru this year we hope to get less rocky surfaces though extremities of weather and terrain will almost be the same as every year. The races conducted during the 2017 season in Morocco have greatly helped the engineers in the development of the machine to roll in the sand, which will be a great asset in Peru. We worked a lot on engine efficiency to be able to traverse through the hilly terrains of Bolivia that we know very well now. We worked with our suspension trainer to give our riders a very good compromise between the dunes of Peru, the mud of Bolivia and the slippery slopes of Argentina. The Dakar remains an event full of unforeseen events that put the bikes under severe strain.

On their goals for the 2018 Dakar as a team
The first and foremost aim is to improve the team's performance at Dakar this year. We intend to get better rankings and stage victories. Besides this, every individual rider will push himself to perform better than last year. We have prepared our riders and worked on a team strategy so that all three riders finish the rally and get higher ranking and record better timing than last year.