Interview: CS Santosh on embarking on his fourth Dakar outing

CS Santosh is our Dakar pioneer. He's come a very long way since attempting the Dakar all by himself in 2015, to now being a part of a proper professional motorsport outfit - Hero MotoSports Team Rally. Before he embarks on Dakar number four, he spoke to us of how he now feels more professional at the event, how his training regimen has been amped up, and how he now knows what to do and precisely when to do it, which is helping him bring home the results.

On his upcoming fourth outing at the Dakar rally:
I think this year I've been getting a handle on things and I feel more professional so to speak. So it's been coming along well and finally we are making progress, is what I would say. Over the years I did a lot of things based on what I felt and thought I should be doing, because I didn't know any better. But this year I have been listening to people who are experts in various fields, and putting a programme together, so it is different this year. 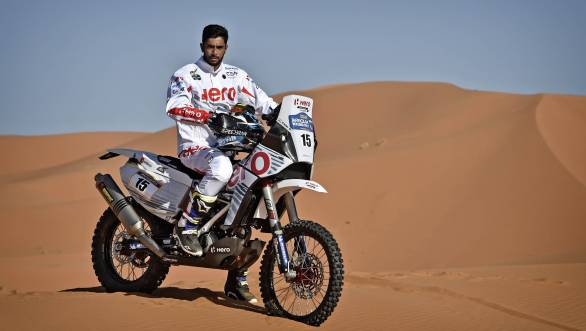 On his second Dakar as a part of the Hero MotoSports Team Rally outfit:
I think today I've earned my place in the team. Because I think in the beginning when Hero signed me on, I felt like they gave me an opportunity. I think this year I have really paid them back a little bit. With good races. I did three good races this year. I think the team works hard in the backend and you expect the rider to also make some progress, so I'm meeting them in the middle right now. So it feels good. I feel like I've grown a lot in this one year. It's something that I definitely take with me as I go to the Dakar and I have a lot of confidence just with that.

On the new motorcycle for the Dakar 2018:
It was a much needed update or evolution from the old bike. The new bike is more in line with what the competition also has. It's more agile, it's much safer, it's lighter. It's easier to work on. It gives me a lot of confidence to be able to ride the motorcycle and it makes my job easier, because I don't have to be afraid of the motorcycle and what it's going to do. Cause it's so much more predictable. For me it's a huge change. Just the whole weight distribution now is so centralized, it has a lower CG than the old bike. And that itself is a huge thing, because at the Dakar, and at any rally, most of the weight comes from the fuel that we carry. So if we have that in a good place, it's a huge change for me.

On his 13th place finish at the 2017 Oilibya Rally of Morocco:
Yeah, so the thing is to have consistent days every single day, and I was able to do this at Oilibya. And also ending up in the top 15, I didn't think I'd be able to do that. But to finish 13th at the end of the day, and to actually compete with other riders who are ex world champions in various disciplines that they come from is beyond me. I didn't expect to find myself in that place, but I guess it happens when you have consistent days, and don't make a lot of mistakes. It's possible.

On his key areas of development over the course of the year:
All this time I was just using my own know how about how things I should be getting things get done, and it wasn't working. But this year I put myself in the position where I could get people to help me, and that's played a huge role. And now I'm more comfortable with reading the roadbook, and trusting the roadbook, and that also helps me. Because most of the time you don't know where you're going, you just need to read the roadbook and trust that roadbook to an extent. The ability to be able to read the road book, process it, and also have all these people who are around with me is making a big difference.

On his training regimen ahead of Dakar 2018:
That's the biggest change. Huge change in my training. I've always been a guy that's been grinding a lot, and you need to be smart and know when to do that. So all the top athletes train hard, (but it's also about) when to get off the training, what to eat, what to drink, how much to sleep. It's quite a daunting task when you think about it. But that's what you need to do every single day in order to be performance ready. So, that's what I've been doing this year. Everything on the ball, on the clock. This year I spent a lot of time working in the gym, training on things that I should have not overlooked over the years. But it's the small things that matter. So I did a lot of core work, I did a lot of dynamic drills. The thing that really suffered, is that I hadn't spent a lot of time on the bike, but that is changing since Morocco. You know. Spending more time on the motorcycle now. Leading up to Dakar, I'll spend more time on the motorcycle. Ultimately do all of that in the gym, but it's only a backend office. Ultimately the skills that really matter are the skills on the motorcycle. So I need to spend more time on that. I've been doing a little bit of mental training also. I was having a little bit of trouble with my processing speed, with my roadbook. So we worked on a lot of things just for me to be able to be more confident in my ability. So whether it's doing puzzles or whether it's working on games that I play on my phone. So all of these things have also contributed.

On whether he has a point to prove at the Dakar 2018:
I mean, of course, when I did my first Dakar as well, the point was to earn the respect of the world. I understand where I come from, I am an Indian, and sure Hero is an Indian company and they need to put an Indian pilot there for various reasons. But this year I think I've earned my place.

On the other Indian rider - KP Aravind - at the Dakar 2018:
That guy is fast this year. I saw him ride in Morocco, that guy is really fast in the dunes. And I have had some conversations with him, and he was able to teach me a lot of things that I have overlooked. And that really helped me out as well. He's going to be the one to watch out for in the dunes. Of course I compete with him, and I want to beat him, and all of those things, right. But that's in the back end. But I also see the guy, and you have to tip your hat, because I understand the risks that we have to take to go fast while rallying. So I tip my hat to him. And I think this year, me and KP, let's just not talk about me, me and KP, we opened a lot of people's eyes. I mean finishing 13th and 15th, I don't think is a small feat.

On his realistic goals for the 2018 Dakar:
You know, having goals and expectations is one level. But I also realised that to have goals and expectations, you just set yourself up to be miserable. So my only goal and expectation in life is to just enjoy the moments that I have. Because at the end of the day, that moment when you achieve a result is really small, but the process of doing it is what I'm really trying to enjoy, and I think this year I enjoy that process at lot more. Like I said, any rally if you can finish, it's a good start. But I also know that it's a rally, it's 14 days, anything can happen. So each day if I can do well, I'm happy. So if I can do well on the first day, I'll be happy. Then if I can make it to the second day and do well the second day, it's great for me, so we just go with that. I think anything that I can do beyond a finish is a bonus right.