Team Mahindra Adventure's Gaurav Gill, and navigator Musa Sherif, won the opening round of the 2017 Indian National Rally Championship, with victory at the Rally of Coimbatore.

The 35-year old Gill, a double Asia Pacific Rally Champion, and co-driver Sherif, stormed to the lead in the very first stage of the event in their SuperXUV. Gill managed to tackle the challenge posed by the gravel road, complete with twists and turns, and ended the stage with a time of 12min and 11sec. This was a full 18 seconds ahead of the rest of the pack. Gaurav Gill and Musa Sherif celebrate their win at the Rally of Coimbatore, Rd 1 of the 2017 Indian National Rally Championship

Gill continued this performance over the course of the remaining four stages, finishing first in each. This meant that he eventually won the rally, that had a competitive stage distance of 70km, with a time of 1hr 36sec. 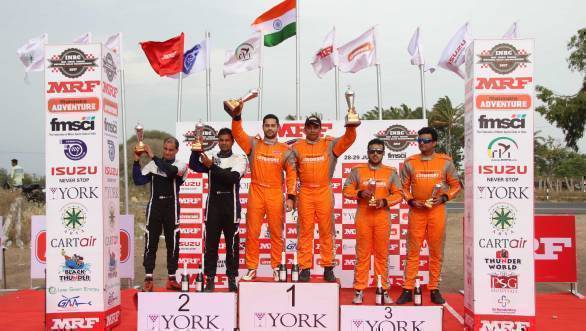 "It was a good win. I enjoy driving here in Coimbatore and it's always nice to start the season with a victory," said Gill after the event. "It was a nice smooth round, with no drama and no fuss. I particularly enjoyed the second stage where our skill and control came into play," he continued.

Kadur, who managed to do well, despite the fact that his Polo was no match for Gill in the XUV, claimed victory in the INRC2 class, ahead of Rahul Kanthraj and Vivek Bhatt who took fifth overall and second in class.

Victory in the INRC 3 category went to Dean Mascarenhas and Shruptha Padival.

Arjun Rao Aroor and co-driver Satish Rajgopal were one of the high-profile exits of the rally, pulling out in Stage 1. Vikram Aroor and Somayya AG were another DNF at the event, with their car burning to a crisp after a crash. Both driver and navigator were unhurt though.