The Baja 1000 is a gruelling race that spans approximately 1000 miles, with participants being granted a period of 48 hours within which to traverse those 1000 miles. It is an event of near epic proportion, which has the ability to make legends out of the people who compete in it. And, of course, it is the subject of documentaries like Dust To Glory, the sequel to which will be released at this year's event. 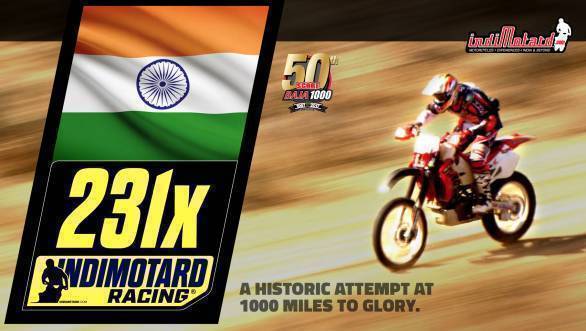 Now, IndiMotard Racing has chosen to be part of the 50th edition of the SCORE Baja 1000, which is a pretty historic edition of the event too. They've put together a team of riders with varying degrees of off-road rally raid and racing experience. This team comprises Anand Dharmaraj, Gurpinder "Nick" Sarao, Aditya Devabhaktuni, Ilyas Bham, Bhaskar Ramani and Gurinder Singh. To compete in the event, the team has chosen the 2014 KTM 500 XC-W.

Now, a little more about the riders. Dharmaraj has competed in the Raid de Himalaya multiple times, finishing in the top 10 on more than one occasion. He has also competed in three full seasons of racing at Willow Springs International Raceway, scoring podiums there. Sarao raced enduros in Texas, and has recorded multiple podium finishes in the Raid, and also followed Race2Recovery at the 2014 edition of the Dakar Rally. Devabhaktuni has competed in races in Europe and America, has multiple top-5 finishes to his name at national racing and rallying events, and is known for his uncanny ability to always cross the finish line no matter what. Bham, who has competed in the Raid de Himalaya thrice, and has recorded podiums in each of those three attempts, also runs a motorcycle school in the US. Singh started racing competitively at the age of 18 and has recorded class victories at events like the Mountain Challenge, the Masa Rally, the Raid de Himalaya and more. And Ramani has in the past, while competing in the Raid, managed to lead the event for five consecutive days.

The team has backup in the form of team leader Prashanth PK (who finished as runner up in the 2008 edition of the Raid) and creative lead, Aniket Das (who works as a designer with the likes of CS Santosh).

IndiMotard Racing will document their participation in the event and will make a short documentary film about their journey at the Baja 1000 which will be available on YouTube after the event.

The 2017 edition of the SCORE Baja 1000 takes place between 14th November 2017 and 18th November 2017. We wish the team luck as they take on one of the most challenging off-road events in the world.