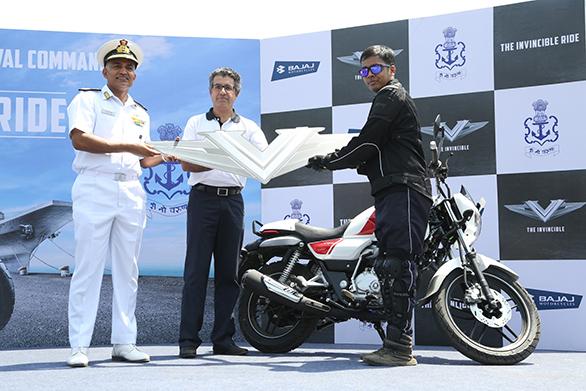 The ride was flagged off today, which also happens to be World Martyrs Day. Speaking about the initiative, Rear Admiral S N Ghormade, Nausena Medal (Flag Officer Commanding Maharashtra Naval Area) of the Indian Navy said, "We would like to attract enterprising Indian youth to join the Navy. On the occasion of Martyr's Day our team has set out on a Motorbike cum Trekking Expedition to 23 forts in honour of Chattrapati Shivaji. We felt that the Bajaj V was the ideal vehicle for this initiative as it contains the invincible metal of the INS Vikrant and V also stands for victory." 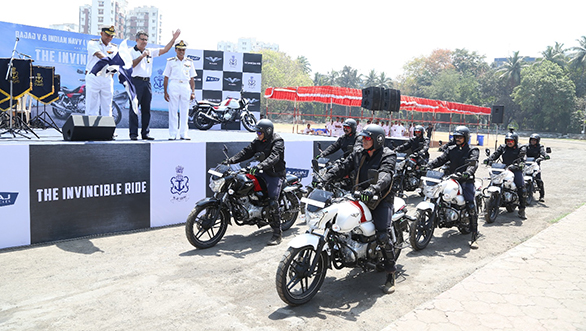 The ride was flagged off from the Kohli Stadium in Navy Nagar, Colaba, Mumbai. The team will cover iconic forts such as Shivneri and Raigad.

The Bajaj V is made using metal from the INS Vikrant, an iconic aircraft carrier that served the nation during the 1971 India-Pakistan War. The war ship was converted to a museum, after it was decommissioned from service. Sadly, the Indian Government as well as the Navy failed to maintain it and sold the ship to scrap metal dealers. That's when Bajaj decided to buy it and utilise it in production of the V. The 150cc engine in the V produces 12PS at 7,500rpm and 13Nm at 3,000rpm.

We've ridden the Bajaj V and here's what we think of it.