Sitting at my desk, typing this out, there's a feeling of good cheer welling up inside me. It's the same feeling I've had in the past while typing stories out for the anniversary issue of OVERDRIVE. When I was little, I'd wait for the magazine's Grand Prix collector's editions to hit the newsstands, and the lure of OD's super-sized anniversary issue always made the month of September very special. The possibility of being on the other side of the magazine was even more enthralling, though. So when it finally did happen, the little girl inside me who once bought copies of this very publication was thrilled. Not only because it afforded me the privilege of saying what I wanted to say, the way I wanted to say it, but also because it gave me access to people I otherwise never would have had access to. And it's about one such person that this tale is. 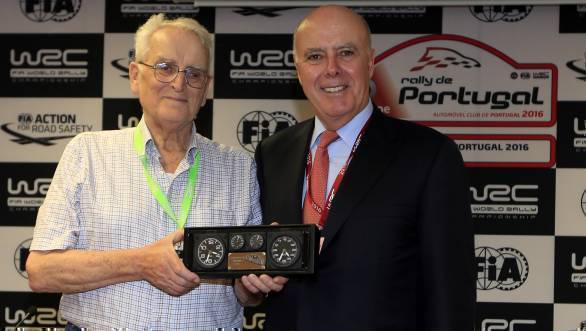 For, as OVERDRIVE slips into its 19th year of production, and while we all celebrate this milestone with fervour, someone who writes for this publication has celebrated a particularly interesting milestone of his own, somewhat quietly and modestly too. Our very own WRC correspondent, Martin Holmes, has turned 500. By that I mean that the 2016 Rally Portugal was Holmes' 500th World Championship Rally in all capacities - as a competitor or as a journalist. It's been a long and rather unpredictable journey.

One that started in the halls of the University of Southampton.

When Holmes was back in college, getting an education like a good young lad ought to, he once came across a fellow student who looked like he'd been out all night. The reason for his dishevelled appearance, Holmes soon found out, was because he'd been, not at any sort of party, but instead at a rally. And with the university's motoring club rather active in those days, Holmes soon found himself navigating. Rallying, he said to me, was meant to be an activity that he carried on in addition to his day job. Until one day he was offered a spot as Shekhar Mehta's navigator at the 1974 Sanremo rally. He'd only meant to take a couple of months off from work, but as Martin says, "I just never went back!"

Today, approximately half a century later, Holmes has become the go-to WRC scribe. It's been a long and interesting career, one that is now peppered with anecdotes about events, drivers, navigators, team owners and absolutely everybody else connected with the sport in some way. You only need to ask Holmes a question, give him a minute to sift through his memories, and come up with a particularly fine one about a person or an event. Whether it's Carlos Sainz talking about jetting off across the world, whether it's being introduced to the King of Sweden, the President of Argentina, the King of Spain, or whether it's the slightly more grim memory of the last time he spoke to Henri Toivonen the morning of his fatal crash. But more than all of his memories, I often marvel at his sheer unwillingness to give up. No matter how far-flung a place, no matter how ridiculous it was to run an event at that particular location, let alone cover a rally there, Holmes would do it uncomplainingly. And no matter how scary an overdraft his bank account might have indicated, he just carried right on.

And both the longevity of Rally Holmes' career and the sport of rallying that he covers got me thinking about time. After all, in rallying, time is the only thing that matters; it's the only thing that counts. And it's measured down to the millisecond. In stark contrast to life itself, where time is the only thing that we all have in endless measure, simply because we don't know when the end is. Maybe that's really why milestones are so important to us. Each passing milestone has the same effect that a trophy has on us. It validates that we've achieved something. It makes us feel a little less lost in a world that's chock-full of uncertainty. And it indicates that in a world where time is such an abstract concept, we've somehow managed to stay ahead in some small way.

Maybe the trick, then, is to do things the way Holmes does. For Martin Holmes believes that when he looks back over his many years in the sport, there isn't a single event that he can pick out as a rally that he could have afforded to skip. In fact, he also believes that he hasn't felt the effects of the passage of time in his long association with the WRC, simply because "time does fly when you're doing something you love". And it's a pretty good way of dealing with life too. Do what you love, because while you can't trick time, every once in awhile you can turn it into your ally.