Honda hit the bull's eye when it introduced the Unicorn way back in 2005. Aiming to replicate its success, Honda has introduced multiple versions of the Unicorn in our market. The majority of them failed to generate substantial buyer interest. The first to arrive was the Honda Dazzler which was discontinued paving the way for the CB Trigger which too met with the same fate.

Not the one to give up easily, Honda took another shot at the premium 150cc commuter motorcycle segment in India with the CB Unicorn 160. As the name suggests, it received a bigger engine. The latest arrival is the Honda CB Hornet 160R which shares the same 162.71cc, single-cylinder, air-cooled with the vanilla CB Unicorn 160. However, the key difference is in the styling bit with the CB Hornet 160R being a sportier version which is targeted at a younger audience. 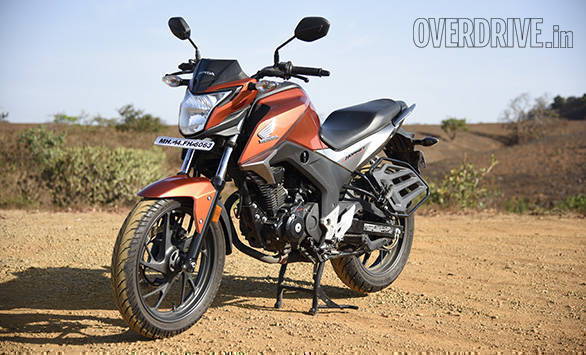 At first glance, the Honda CB Hornet 160R catches your attention with its muscular design. The overall styling packs in the right amount of aggression and muscle without going overboard. The wide fuel tank gets chunky forward leaning shrouds which are neatly done making it look distinct. The other eye-catchy bits include a digital instrument console, stylish five-spoke split alloys and the unique X-shaped LED tail light.

Like any typical Honda motorcycle, fit and finish levels are impressive. However, everything else isn't perfect and there's a lot that's left to be desired. For starters, the quality of the switchgear and the plastics are a big disappointment. Surprisingly, the CB Hornet 160R carries over the same switchgear from Honda's lower segment offerings. For a motorcycle that is addressed as a premium 150cc offering, this isn't cool. Another disappointing bit is the omission of an engine kill switch.  The seat is wide and long and easily accommodates two large frame adults. However, the seat cushioning is on the softer side and long hours on the saddle will leave you with a sore bottom. 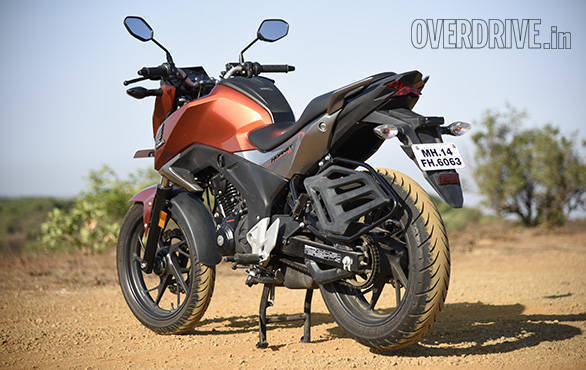 All show, but does it go?

The Honda CB Hornet 160R is powered by a 162.71cc, single cylinder, air cooled engine which makes 15.9PS at 8,500rpm and a peak torque of 14.76Nm at 6,500rpm. The engine comes mated to a 5-speed transmission. Thumb the starter and the motor comes to life and settles into a smooth idle which is characteristic of this engine. At low speeds, the engine responds well to throttle inputs and it offers good bottom-end torque. The motorcycle can comfortably trundle along in typical slow moving city traffic in third gear without even the slightest hints of protest from the engine. 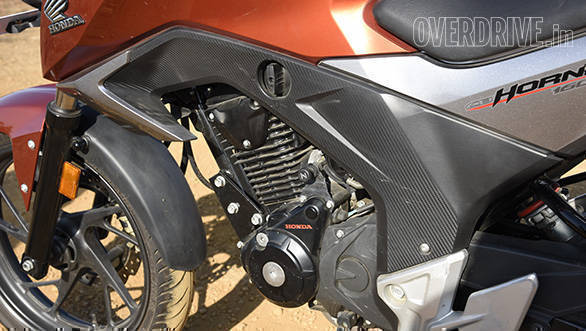 The CB Hornet's engine delivers power in a linear manner which is much appreciated while riding in the city. Even while riding on the highway at speeds between 60 and 90kmph, the engine feels smooth and it can comfortably cruise at such speeds all day long. However, during hard acceleration and especially beyond 6000rpm the engine starts sounding hoarse and feels like it's out of its comfort zone. Also, a fair amount of vibrations can be felt on the footpegs and the handlebar which is uncharacteristic of any Honda motorcycle. During our acceleration tests, it took 4.58 seconds to sprint from 0-60kmph and 14.55 seconds to reach 100kmph from standstill. It attains a top speed of 109kmph. On the efficiency front, it delivered 39.5kmpl during our city runs and 49.3kmpl on the highway.

The Honda CB Hornet 160R gets a diamond type frame with the engine as a stressed member. At the front, it gets a telescopic suspension and a monoshock at the rear. Braking duties are taken handled by a 276mm disc up front. The non CBS versions get a 130mm drum while the CBS equipped versions get a 220mm disc at the rear.  It runs on 17-inch wheels with 100/80 section tyres at front and wide 140/70 section tyres at the rear (both tubeless).

The handlebar is set slightly high which aids comfort while riding in the city while the rear set footpegs add to the sporty appeal. The CB Hornet feels very nimble to manoeuvre and changes direction easily without requiring much effort. It happily changes direction in traffic and you can literally chuck it into corners without worrying if it will stick to the intended line. Compared to the Unciorn 160, the suspension on the CB Hornet 160R is set up on the stiffer side which hampers ride comfort while riding over bad roads. 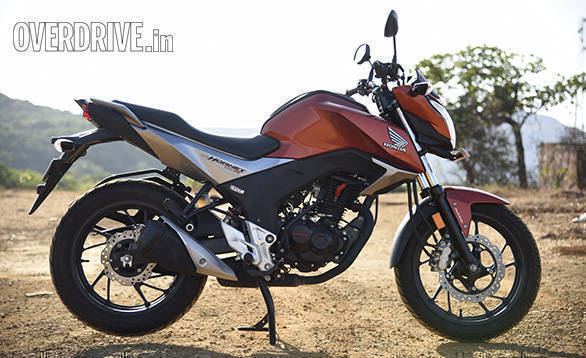 The motorcycle that we tested was the version that comes equipped with Honda's combined braking system. Although it sounds great in theory, in reality it requires some effort on the rider's part to shed speed quickly. The front brake lacks feel and best results are extracted only by pulling the lever strongly. Although the braking performance is okay during typical city commutes, around corners things can get hairy at times.

Another flash in the pan?

The Honda CB Hornet 160 R is available in two versions. The version without Honda's combined braking system costs Rs 92,657 while the version that comes equipped with it is priced at Rs 97,661. Although Honda is positioning it as a sportier offering over the CB Unicorn 160, the CB Hornet 160R does not offer any substantial performance gain.  Like any typical Honda motorcycle, it will be reliable, fit and finish levels are impressive and it offers a nice blend of performance and economy. However, the riding experience is boring and it won't excite you for sure. What works is the muscular styling which not only makes it stand out from its peers but also makes it look bigger. Overall, if you are looking for a stylish, fuss-free city commuter, then this one is worth putting your money on. 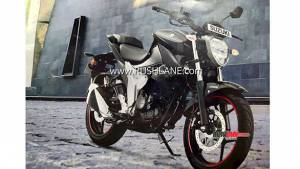 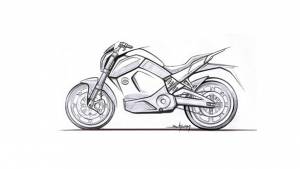 Revolt's all-electric motorcycle to be...
Advertisement