The Hero MotoSports Team Rally outfit is gearing up for the 2018 Dakar Rally, with riders CS Santosh and Joaquim Rodrigues. And in order to tackle the Dakar for the second time as a team, they have a new version of the Speedbrain 450 that will take to the sand dunes come the 1st of January. 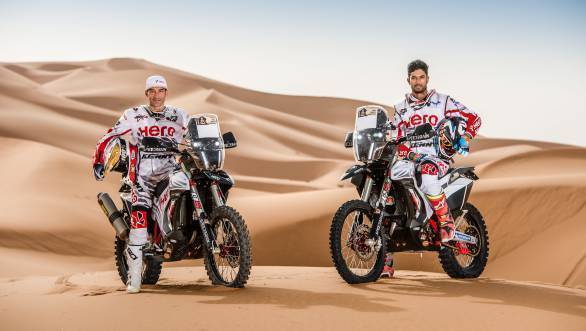 However, before Santosh and JRod tackle the Dakar, the team will put the new motorcycle through its paces at the 2017 OiLibya Rally of Morocco. The two riders have already had a go of riding the new Speedbrain 450 at the Pan Africa Rally last month, and faired decently, with both riders finishing in the top 10. Santosh ended the rally ninth, while his team-mate, JRod ended seventh. In addition to this, both riders have tested the motorcycle extensively in Morocco.

The OiLibya Rally of Morocco will be held between the 5th and the 10th of October. It begins with a Prologue stage on Thursday, October 5th, and continues over five stages through the Moroccan desert. The total distance of the rally is 2,600km, with 1,870km competitive distance. The highlight of the rally will be the third and fourth days, both of which will have special stages that run over 400km each.