Based on the crash tests conducted by Global NCAP earlier this week where the Datsun Go and Maruti Swift scored ducks, NCAP has issued a letter to Nissan asking them to withdraw the Go from the market right away.

Chairman for Global NCAP, Max Mosely wrote to Carlos Ghosn who is the CEO of the Renault-Nissan alliance saying, "It is extremely disappointing that Nissan has authorised the launch of a brand new model that is so clearly sub-standard. As presently engineered, the Datsun Go will certainly fail to pass the United Nation's frontal impact regulation. In these circumstances I would urge Nissan to withdraw the Datsun Go from sale in India pending an urgent redesign of the car's body shell."

The global organisation for testing car safety has declared the Datsun Go unstable of body frame. The crash tests which were conducted at 64kmph resulted in critical injuries to both the driver and occupant dummies. A score of two stars was awarded to the Go for child protection as the front seats took most of the impact. The Datsun Go's body shell disintegrated badly and due to the 'unstable body structure', which apparently is extremely flimsy, even fitting airbags on the Go will not improve its crashworthiness, says NCAP. The Indian government incidentally has mandated airbags be fitted as standard equipment on all cars from 2015, but this will not change anything unless other aspects are modified tremendously. 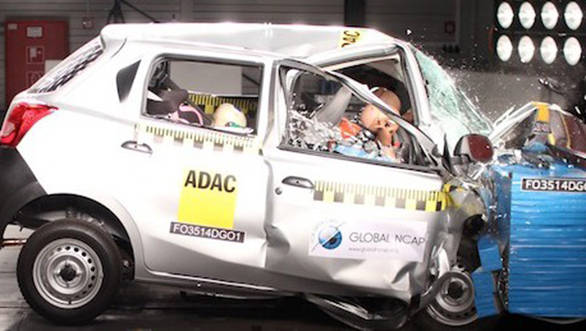 Right after the crash test results were declared, Nissan issued a statement which read, "Datsun Go meets minimum required local vehicle regulations in India and was developed with a strong intention to deliver the best adapted solutions to the local conditions, from best in class braking and good visibility to durability, seat comfort and reduced motion sickness  all being taken as a package aim to decrease potential risk of road accidents."

The minimum required vehicle legislations reasoning has often been used by several manufacturers as an excuse to justify poor safety systems and engineering. This incident also puts a big spotlight on the plight of India's safety standards and just how safe is safe for Indian legislation?

We also spoke to Datsun India and what they had to say is that they are aware of the situation but haven't received any intimation from global headquarters as to the next plan of action.

Datsun launched the Go in India earlier this year, its first, following the company's resurrection in late 2013. Currently the Go is an entry-level car which competes with the likes of the Alto and Hyundai Eon. Next year, Datsun is expected to launch two more new products in India and these will also be based on the Go. It remains to be seen if Datsun India takes any action on Global NCAP's recommendation. It may be noted that Global NCAP does not have any authority on any market and it has been conducting these tests independently with recommendations going out to manufacturers and governments. Questions arise then that if Datsun indeed, in the interest of safety, withdraws the Go from the market, what will become of current Go owners? Will the two new products based on the Go also have to be re-engineered to provide some semblance of safety?

How does the Datsun Go fare in the OD garage 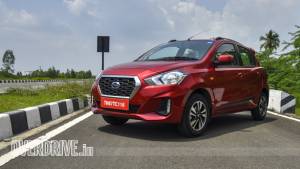 Datsun Go and Go Plus BSVI revealed in India
Advertisement