Nick Heidfeld qualified tenth, but was able to start the race from eighth on the grid due to the fact that the two DS-Virgin cars were handed penalties. Felix Rosenqvist, meanwhile, did the team proud by taking Super Pole. It seemed like things would proceed smoothly for the Swedish driver. 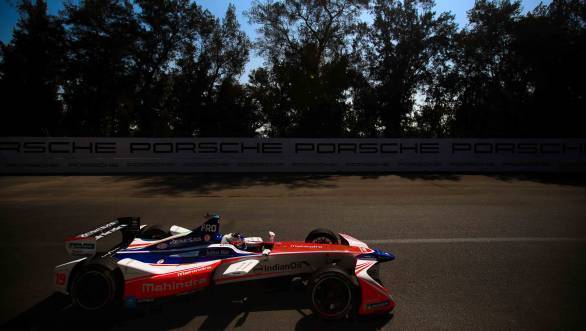 Felix Rosenqvist at the 2018 Mexico ePrix

When the race started, Rosenqvist managed to get out ahead of the rest of the field and managed to maintain a gap to the NIO of Oliver Turvey. However, Heidfeld dropped down the order while trying to avoid collisions and the like.

While drama continued behind Rosenqvist, he managed to pull away from the second car, maintaining his lead over the rest of the pack. However, on the 15th lap of the race, Rosenqvist's car slowed down to a complete stop due to a Battery Management System error. Over the course of the next few laps, after stopping and starting repeatedly, the Swedish driver came into the pits and swapped cars. However, given that he had stopped early, and needed to conserve energy, attempting to make it to the finish line would have been pointless. Which is why the team decided to retire him from the race.

A few laps after Heidfeld's routine pitstop, his car started experiencing mechanical issues too. And so the second car was also retired.

Speaking of the race weekend, Mahindra Racing's team principal and CEO, Dilbagh Gill said, "A very disappointing day for us, pole position, a comfortable race lead. Unfortunately, a common part, the battery, failed on Felix's car but at the end of the day we're still positive that we had the car to win."

Nick Heidfeld said of his race, "It was not the best race start, we were bunched up and I tried to avoid doing anything crazy in the first half of the race. After the pit-stop, the car felt good on my out lap and I had my sights set on making up some positions; unfortunately, soon after I had a technical problem with my car, and there was nothing else to do except box the car."

Rosenqvist, who led the championship standings early on in the season stated, "One of those rare days when I can say it was quite a perfect Saturday. Right from the practice sessions through to qualifying. I was out in front with a comfortable three second lead and it was getting better. It was all a bit too good to be true, but the issue was not in our hands. We need to move forward from here and get back to the top."