Mahindra Racing has done an excellent job in their third season in Formula E. They ended the championship in third position in the team's standings, and made everybody sit up and take notice of them. Now the team has decided that they need to raise the bar, and hence they are aiming to fight for the drivers' and teams' championship with their M4Electro.

In a letter addressed to all their "passioneers", which is what Mahindra Racing calls their supporters and fans, Dilbagh Gill, team principal, Mahindra Racing, said, "We have set higher targets for ourselves in Season 4  to compete for the teams' and drivers' championship titles." 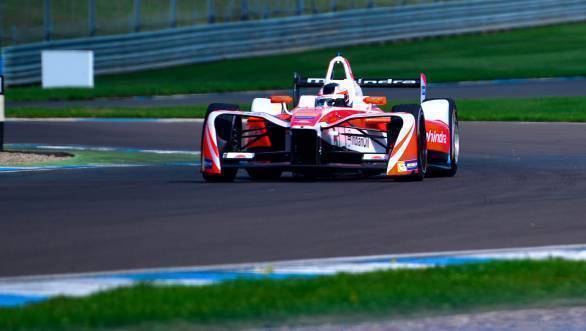 Mahindra Racing will aim for championships and wins in Season 4

In order to achieve this, Mahindra will continue with their existing driver line up in Season 4. The team will once again see Felix Rosenqvist and Nick Heidfeld get behind the wheel of their Season 4 machine. "We have been flat out testing at our track in Spain and are happy with how M4Electro is growing," said Gill.

The fact that the team was keen to retain Heidfeld and Rosenqvist comes as no surprise, since they did help Mahindra to their most competitive season thus far in Formula E. Along the way, Mahindra took one win (at the Berlin ePrix), ten podiums (five for Heidfeld and five for Rosenqvist), three pole positions and two fastest laps. They also took the most podiums of any team during the season.

Gill also said "We're thrilled that both Nick and Felix will remain with Mahindra Racing next season. With them, we're confident that our new race car, the M4Electro will prove to be our strongest yet and Mahindra will consistently be fighting at the front of the field for wins and championships."

Heidfeld said, "I am proud to be part of Mahindra Racing where we have been going from strength to strength in Formula-E. It's exactly where I want to be and I am delighted to extend my contract and commitment to target even more success. I am thrilled and can't wait to compete in my M4-Electro in this ever-improving championship."

Meanwhile, Rosenqvist, who had a strong debut season said, "I'm thrilled to be back for a second season in Formula E and to extend my relationship with Mahindra Racing That was our mutual intention from the very beginning, and we've already completed a series of promising tests with the M4Electro in recent months. Moving into season four, I will draw on everything I learned in 2016-17 to try and lift us to the next level. It will be a massive challenge with stiff competition, but we have a solid foundation and are all fully committed to taking the fight to the very best."