The site of their first ever Formula E win, Tempelhof, Berlin, proved to be not quite as fruitful a circuit this time around for the first ever Indian team in electric racing. The Mahindra Racing Formula E team had a tough day at the Berlin ePrix, with Nick Heidfeld finishing 10th, enough to give the team one point, and Felix Rosenqvist finishing 11th. Despite this, Rosenqvist remains third in the championship standings, behind Jean-Eric Vergne and Sam Bird. Mahindra Racing is currently fourth in the Constructor's Championship.

The day began well, though, with Heidfeld topping the timing sheets in FP1. But with qualifying not going his way, Heidfeld had to settle for 14th on the grid. He still managed to get a good start in the race, maintaining position over the initial five laps, and then slowly making his way up the order. He seemed set for an eleventh place finish on the last lap, but a battle that was raging between Piquet Jr and Lopez went wrong, allowing Heidfeld to move up into the points. 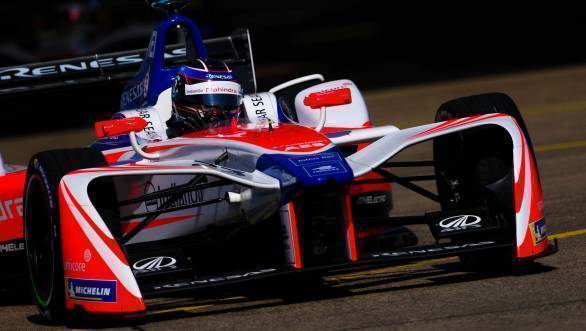 Rosenqvist, who also missed out on Super Pole, had a sixth place start. On the first lap, things went wrong for the Swedish driver, with his car locking up at turn one, resulting in him going wide, falling back to 15th position. He then was able to climb two positions by the halfway mark, and then a further two positions were gained after a terrific pit stop by the team. Rosenqvist battled on in the second stint, but ultimately, despite scrapping hard, finished in 11th.

Said Rosenqvist of the day, "Overall it's been a tough day. Qualifying was quite good. I put in a good lap and it was disappointing to miss out on Super Pole. In the race I tried to make a move but I locked up going into turn one. It was a gamble and it was my fault but I think we would have struggled today; we finished 45 seconds behind the leaders so that's something we need to look at. Thanks to the fans for voting in FanBoost. Now we'll look forward to Zurich."

Heidfeld also acknowledged that the day had been hard, saying "It was a bit of a frustrating day but on the other hand I had a lot of fun having so many battles. But you prefer to fight for a podium and not for tenth. But it's even hard to talk about all the fights I had as there was so much going on. It makes a big difference at this circuit going either one lap shorter or longer than the others so that made for a lot of on-track fights. I'm looking forward to Zurich, which is a home race for me, and looking for us to be back in the fight there."

"Tough day for us, it's just been one of those races where things didn't start well. We pushed hard on track and we tried something a little different with the strategy to move up the field. Both our guys pulled off some great overtakes but the end result isn't where we want or expect to be. Our focus is now on Zurich and getting back to where Mahindra should be," said team principal of Mahindra Racing, Dilbagh Gill.