After launching the EcoSport in India and Nepal, Ford India has now commenced export of the SUV to South Africa. The aggressively priced EcoSport has had a successful first few weeks in India since its launch on June 26 - with a waiting period extending to six months. 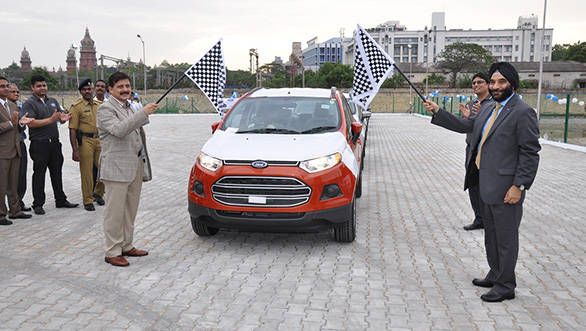 Ford will ship the EcoSport units to South Africa from Chennai. The Chennai Port Trust recently allotted a dedicated parking space to Ford for its EcoSport. The number of units allotted for exports and the models/variants have still not been confirmed.

Ford has announced that it will launch the EcoSport in Europe, Middle-East, Sri Lanka and Vietnam by late 2013 or early 2014.

The South African market is likely to get all the variants available in the Indian market. The front-wheel drive EcoSport includes the entry-level 1.5-liter TiVCT petrol engine, which has a 5-speed manual or Ford's 6-speed dual-clutch PowerShift automatic as options, a 1.0-liter 3 cylinder turbocharged EcoBoost engine with a manual transmission, and a 1.5-liter TDCi diesel engine, which comes mated to a 5-speed manual. The EcoBoost variant delivers a fuel efficiency of 17.24kmpl.

Ultimately, Ford plans to take the EcoSport production global. Besides Chennai in India, Ford has shortlisted locations like Elabuga in Russia, Rayong in Thailand, Camacari in Brazil and Chongqing in China for its plants. It will be retailed in 62 countries by the year 2017.