The chill may have only just started to set in, but FMSCI is all set to thaw it out with a month choc-a-bloc with some hot motorsport events. December 2015 begins with Supercross  action as the sixth and final round of the MRF MoGrip FMSCI National Supercross Championship will be conducted in Bangalore on December 4 and 5. The organisers are Godspeed, Pune. Mangalore's KP Aravind is still the leader in the overall championship standings and will have to be wary of AW Tanveer as they gun for the national title. 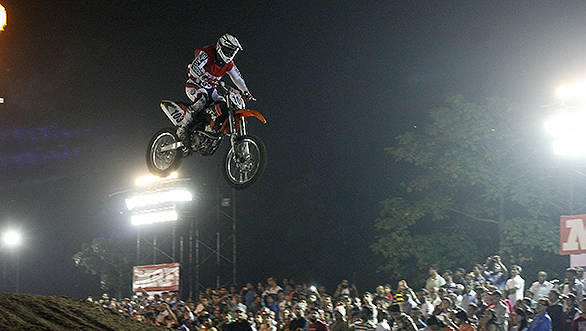 The fifth and final round of the MMSC FMSCI Indian National Motorcycle Racing Championship will be conducted at the Madras Motor Race Track on December 13. The organisers are MMSC, Chennai. The best two-wheeler riders in the country will aim to clinch the title as expertly-tuned machines will provide thrilling action.

December 15-16 will witness the Rally de Orange 2015, the eighth round of the FMSCI Indian National TSD Rally Championship 2015 in Darjeeling. The organisers are RRPM, Kolkata. TSD rallying has been gaining popularity in India, thanks to the low speeds and relatively low equipment cost as compared to stage rallying.

The Raging Rhino Rally 2015, on December 19-20, will be the ninth and final round of the FMSCI Indian National TSD Rally Championship 2015. It will be held in Guwahati and will be conducted by NEMA. The fifth and final round of the MRF MoGrip FMSCI Indian National Rally Championship 2W  2015, the Bangalore Rally, will be conducted on December 19 and 20 in Bangalore. The organisers are KMSC, Bangalore. KP Aravind will look to seal the title in this final round.

The weekend from Dec 4-6 is when the 2015 edition of the Ultimate Desert Off-road Championship takes place in Bikaner, organised by Dune Adventure Sports Club. The weekend after that (December 12-13) is going to be even more intense because the V1 Racing Dirt Cross 2015 in Vizag and the Fast & Furious Rally Cross I in Ludhiana occur simultaneously with the fifth round of the Honda MMSC One Make Championship 2015 at the BIC. Chennai's Meco Motorsports have also organised the Schools, Colleges and Corporates Karting Championship for this time.

The action thereafter moves to Nashik which will host the WISA's Blind Man TSD Car Rally 2015 from Dec 19-20. Meanwhile, down south, Team Sportz Unlimited aren't quite ready to accept it's winter already because they're organising an Autocross event called the Summer Sprint in Bangalore, spread over two days - that is December 20 and December 27. The last weekend before the year closes will see some dirt track two-wheeler racing in the Kanakothsava 2015 at Bangalore again, hosted by the DKS Youth Sports Association. And some more open two-wheeler racing will happen in the Wild Escape - Touring Assemble, organised by VARA at Nagpur, Maharashtra.

So make sure you block your dates in advance. See you at the racetracks. Or the next rally stage!