I've driven two racecars in my life so far, and both were designed to be stepping stones into the world of professional racing. The first was an old 800cc open-wheel FISSME (Formula India Single Seater Maruti Engine) racecar -- the first step for Indian drivers towards open-wheel racecars back in the early '90s. The second is this, the spanking new Ameo Cup racecar -- the first step for Indian drivers getting into touring car racing in the modern era. There was the Vento Cup car till last year, but with this whole exercise being a bit of a marketing activity for Volkswagen, it called for change. 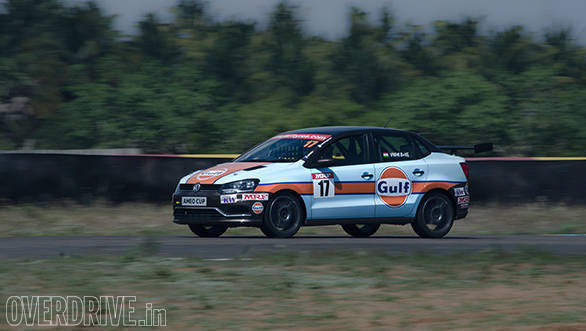 So what's changed? Quite simply, almost everything. To begin with, this car, unlike the Vento Cup car, was almost fully designed and developed in Pune by Sirish Vissa, the head of Volkswagen Motorsport India, and his army of engineers. They've essentially taken an Ameo and done away with almost everything that makes it an Ameo. There is the same monocoque chassis and body panels of course, but that's about it. Plonked under the hood is the 1.8-litre turbo-petrol engine from the Volkswagen Polo GTI. But while the GTI makes "only" 192PS, the team has retuned the engine to make 205PS. Vissa had told us earlier that they could "tweak the engine to give [it] a lot more power, without making big changes," but decided against it, to keep the car beginner friendly. I was a bit sceptical -- a 205PS racecar that weighs around 1,150kg in the hands of a newbie? That certainly sounds "friendly". Then I realised that I was technically a newbie. Then I got a little worried. The fact that the Polo Cup cars -- which the Ameo shares its wheelbase with -- were notoriously tail happy, didn't help. I had driven a faster, significantly more powerful car around a track, but there's just something about a purpose-built racecar that seems a little intimidating. 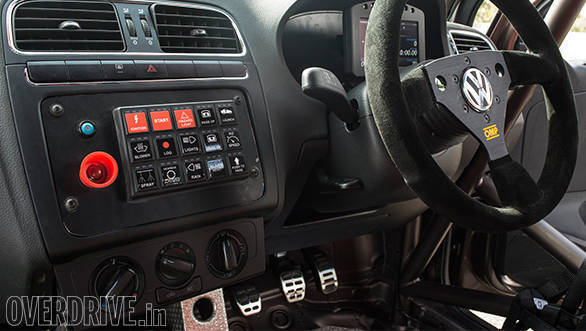 There was still some time before we hit the track, so I distracted myself with more specifics about the car. It gets a 6-speed sequential gearbox instead of the GTI's 7-speed DSG. However, instead of a mechanically operated gear-stick, they've given paddle shifters so that first-timers don't end up downshifting too aggressively and blowing up the engine. Phew! That's the first beginner-friendly thing I'd heard so far! I was also told that the suspension set-up was a bit softer than in the Vento Cup car since it now weighed around 50kg less. This change also made it a little friendlier in the hands of a fresher. Friendly...yes, I liked the sound of that kept and repeating it to myself as I put on my helmet. Then I remembered that the track wasn't being very friendly that day. The recent repaving of certain parts of the track had left enough loose gravel in several sections making it slippery enough to be a great "rallycross" stage as Rayomand Banajee, the driving coach, had said. In fact, it was so slippery that VW had closed off the second half of Kari Motor Speedway -- the "Mickey Mouse" corner and the bowl -- and asked us to use the short loop. 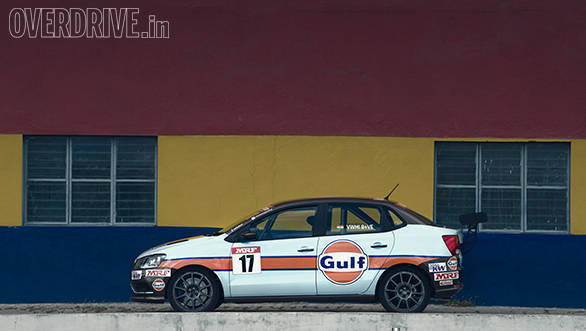 But getting back on track, it was time for the sighting lap. I don't clearly remember the first thing that came to mind when I fired up the car, but it had something to do with being very happy. But the next second I was thinking, "Don't stall, don't stall!" And I didn't! How could I have stalled an automatic car, you might ask. Well, the Ameo Cup car uses a regular clutch to get moving from a standstill, to get into neutral or to shift to reverse. But once you're moving, there's a small device that takes care of all the shifting and clutch-ing and what not. I say small device, but it actually weighs around 8kg.

Once we got moving, the next step was to make sure I didn't spin out. We were still on the sighting lap, so nothing should go wrong, right? Wrong. We picked up some decent speed down the straight approaching C1 and then I followed the rules to the T -- brake, downshift and then turn. And yet, I felt the rear tyres give because the slicks were still cold. Fortunately, with a little gas and counter-steer I found myself back in line. Phew! That wasn't so bad. In fact, that actually counts as fun! 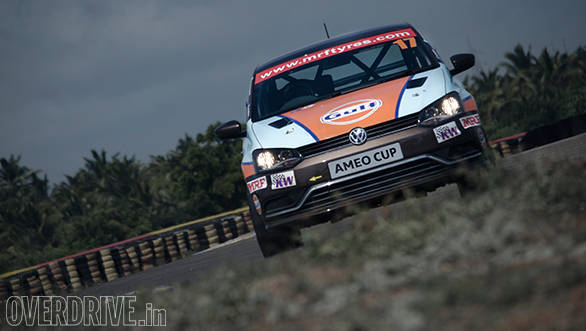 Alright, sighting laps done -- it was time to give it the beans. I took the first few laps a little easy -- understanding the car and its temperament. But by the third or fourth lap (I didn't really keep count), I was braking late, throwing the car into corners and hitting the pedal to the metal every chance I got! Once the tyres were hot enough, they stuck like glue and absolutely refused to give. The MRF slicks on the Ameo Cup car are made of a different compound and construction compared to last year, to better suit the increase in power and change in weight. The brakes, meanwhile, are pretty much the same, with the huge front discs being borrowed from the high-performance Golf R32, and the rear discs from the Polo GTI. The result? You can brake incredibly late into the corner and not worry about driving off the track or crashing. 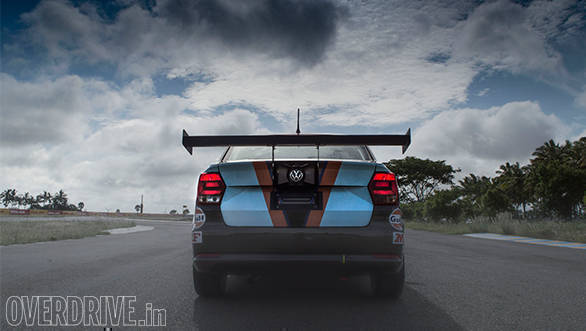 On the other hand, the big carbon wing (also designed in India) is said to add 50kg of downforce on the rear axle at 160kmph. Now, did I feel that downforce? I don't know. The tight corners and the short straights didn't really allow us to carry that much speed through the corners. But I do know this -- the car stays unbelievably flat. The comparatively softer suspension set-up also meant the car was a little more comfortable, especially while hitting the curbs, throwing one wheel up in the air. The steering did feel a little light initially, but that was simply because I wasn't used to one that was so responsive and direct. 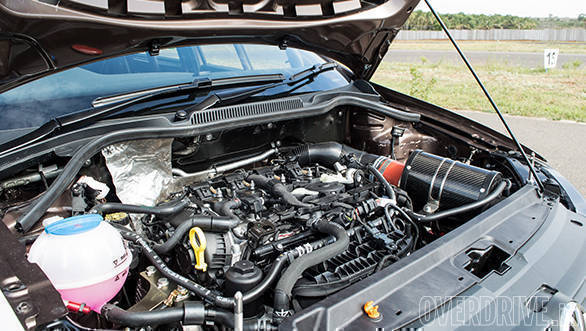 And then there's the engine. I absolutely loved it in the Polo GTI for how smooth and linear it felt and now I love it even more in the Ameo Cup car for the very same reason. There were no sudden power spikes jumping out of the dark and scaring the living daylights out of you. And the gearbox only made things that much better, offering super-quick up and down shifts. My car was a bit glitchy though, with the gearbox sometimes falling to neutral while shifting from second to third. By the time the session was done, I was sweating from head to toe, but I barely noticed the heat out on the track. In fact, I barely payed attention to anything but the apex, and the next apex and the one after that and so on until I almost ran out of fuel. Thank goodness for that new everything-you-need-to-know display mounted on top of the steering wheel. It shows you everything from fuel level to lap times, water temperature and oil pressure. It's a big jump from the unit used in the Vento Cup car, but so is everything else in the cabin. By everything else I mean whatever else was left in the stripped-out cabin. For instance, the switches for all the controls have been replaced with a keypad for better longevity and reliability. It's got switches for a whole bunch of functions like launch control, ignition, lights and a pit lane speed limiter. There is a push-to-pass switch, which Volkswagen is looking into introducing in the future. 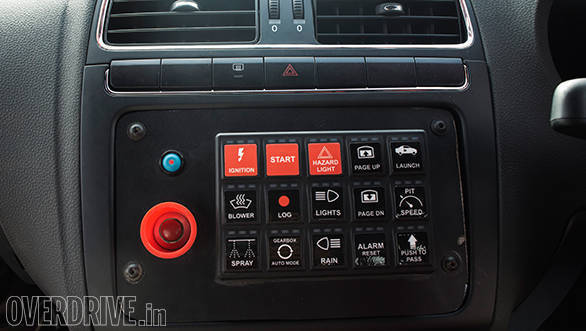 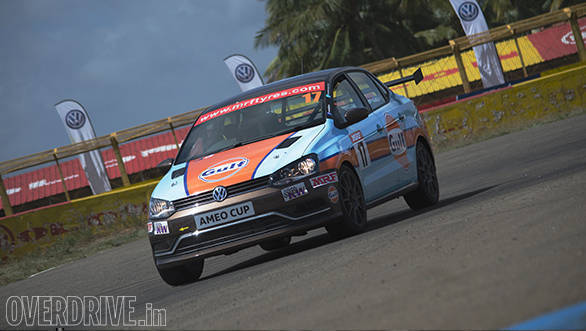 But where is the future heading to? I can't tell. But I can tell that what Volkswagen Motorsport has in their hands right now is a genuine racecar. An entry-level racecar, but a proper one at that. I don't remember too clearly how the old FISSME drove, but I do remember the experience -- it was fun, it was easy and, most importantly, it taught me what a racecar feels like. And that's what the Ameo Cup car does -- it prepares you for the bigger, more difficult international-spec touring cars. It's a car in which you'll feel comfortable pushing both your own limits and the car's, after just a few hot laps. 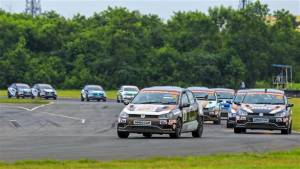