Things you should know before you add that high-performance ECU

It appears that everyone thinks adding a hotter ECU to your new fuel-injected motorcycle will gain you more power. Plug and play. But before you spend that money on that chip, here are a few things you should know. We had a four-stage ECU from RaceDynamics just like this on test in the Duster, which allowed you to flip a switch and enjoy four entirely different power setups

The theory is sound

The basic method of making more power from internal combustion engines hasn't changed. If you want more power, you're going to need more air and more fuel. This is what the process of rejetting a carburettor is about. You added a bigger jet to introduce more fuel and you usually added a freer flowing intake filter to be able to suck in more air. If you were really anal, you would also go find a replacement ignition control unit that was able to alter the spark timing to take better advantage of the extra fuel and air. These replacement units also paid no heed to the boundaries set by the manufacturers' need to meet emissions or noise norms, so the solution was effective.

With a fuel-injected engine, this gets easier. The same chip controls the spark timing, the engine redline, the amount of fuel that needs to be fed in to match the air... everything. And if you can find a good replacement, it literally is a way to get more power by plug and play. In fact, we had a four-stage ECU from RaceDynamics just like this on test in the Duster, which allowed you to flip a switch and enjoy four entirely different power setups.

More than one way to skin a cat

The ECU for a fuel-injected engine relies on sensors reporting the state of the engine to determine things like spark timing and other combustion parameters. The older systems and some current piggyback systems (the new 'ECU' gets plugged into the motorcycle and then into the original ECU) still mess with the sensors. Essentially, they fool the OEM ECU into believing that the throttle position and load is in a state that needs more power as a way to make more power.

Replacement ECUs or reflashed ECUs bring their own set of responses to these sensor data reports, usually offering more torque at the expense of economy. Loosely put, it is like a race ECU on a street bike.

But all replacement chips and ECU aren't born equal.

We have recently heard of a number of ECUs that claim to raise top speed by allowing the engine to run past its stock redline. You should probably think long and hard before you accept this as a performance mod.

Engineers usually determine redlines by looking at two things. The obvious one is the engine's power curve. If you hit peak power at say, 10,000rpm then the consideration is how the power tails off after that. If in another 1,000rpm, the engine is making substantially less power, the only utility of having a still higher redline is allow over-rev. As in, allow some flexibility for riders in situations where the right-est gear for a corner requires you to be in a lower gear but above peak power.

But the expectation is that this solution is only required now and then, maybe at one corner our of fourteen or fifteen on a racetrack. Riders using over-rev on the street are just riding badly in 99 per cent of the cases.

The other consideration for the redline is the speed of the piston. The piston, for each part of the stroke, has to come to a dead halt at both the top of its stroke (TDC) and the bottom of its stroke (BTDC). In the middle lies epic acceleration to peak piston speed and then the equally dramatic deceleration back to a full stop. For each size, design and metallurgy of a piston, there is a finite peak piston speed before it disintegrates.

Now consider the impact of, say 500 extra rpm on piston speed. The math is complex but the upshot is that for every increase in the rpm, the piston has to be able to complete two laps of its stroke. A piston running a 65mm stroke, for example, at 10,000rpm, is traveling at about 22m/s or roughly, 80kmph. Raise the speed to 10,500rpm, and the piston needs to travel at 83kmph. This doesn't sound like much, but you have to remember that this means, at 10,500rpm, the piston has to make 21,000 dead stops and then accelerate to 83kmph 21,000 times as well. Every single minute you hold these revs. Raise the redline high enough and you'll simply break the piston.

Now add the two up. If your engine isn't making significant power beyond the peak power revs, then raising the redline only opens the door for damage and little else.

Does it raise the top speed? It might. If you hit your top speed at redline in top gear (the 200 Duke for instance), a higher redline might add a few kmph on top. If you hit top speed with revs to spare (most bikes in India), however, it might not  your top speed will be determined by whether or not the extra revs give the engine enough power to push through the air at speed.

How to buy a chip upgrade, then?

Start by finding out what the claim from the maker is. If it is just going to raise the redline, walk away, it isn't worth the effort. If, on the other hand, the promise is of an new ignition map that makes more power everywhere, then you need to ask still more questions. The reason is that manufacturers spend a lot of time and effort both in design and then in verification to ensure their ECUs do what they are supposed to, and this requires a lot of resources to get right. And while almost anyone with a computer can, in theory, make their own ECU, getting it to do good things is much harder.

As you now, OVERDRIVE uses a GPS-based performance measurement device called a VBox to measure performance. This is a pretty accurate way to establish vehicle performance. A quick acceleration run will show where and how the performance has changed. And since devices like these log speed, distance and time data as often as 10-20 or more times per second, there is ample data to see what the engine is up to.

But manufacturers and reputed chip tuners abroad only use the VBox or equivalent measurement equipment to confirm findings, not for actual tuning. Actual tuning is done on a dynamometer. And that is where the questions need to go.

A dynamometer, or dyno, is a device that uses a braked roller that is driven by the vehicle's driven wheels connected to a computer. What it does is allow the dyno operator to see how the power arrives at the driven wheels for every rpm in every gear. Because the vehicle is actually run, most dynos also add cooling fans and exhaust routing equipment to ensure the engines are thermally stable and exhaust gases don't clog up the room.

Unfortunately, a dynamometer is also expensive and that is why almost all of India's dynamometers are to be found in manufacturer R&D departments. And without a dynamometer to guide the tuning of the chip, accurate results can be hard to get. There is always the possibility that the chip tuner is a genius and his experience and skill allows him to design superb chip tunes but by design, geniuses are rare too.

So the question you have to ask the chap offering to sell you an ECU is a) what will the new software do and more importantly b) how was it tuned? A measured improvement in performance is perhaps a reasonably good place to start your search for more performance, but a dyno-tuned piece of software is usually vastly more accurate in terms of fueling and allows the operator to tune the most effective, most efficient map possible.

The expensive, but perhaps safer option is a tuning box like a Power Commander or Juice Box or equivalent. These don't really come with pre-loaded big-power setups. But they do come with the possibility of loading up new maps at will, something most cheaper aftermarket ECUs won't do. If you have a bike available internationally, various forums will quickly lead you to maps that work demonstrably, measurably great on a setup identical to yours or nearly the same as yours. By setup here we mean primarily your exhaust headers and the end can. The beauty of it is that you can try it and then keep or discard the map depending on the result.

The point is that the software-ification of our motorcycles is happening and more and more bikes will have software that governs their engines. Which means tuning the software can allow you to make your engine do things that are more to your liking and, for example, make more power. But just like buying new apps for your mobile phone, all software isn't born equal so you need to be careful with what you are buying. The worst case scenario is a blown engine but a more likely bad situation is an engine that gets damaged over a longer period.

Also remember, that if your motorcycle is still within warranty, messing with the ECU will instantly lead to the cancellation of your warranty.

So pay attention when you're buying and spend the money on reputed brands that can clearly tell you how the new software was tuned, tested and then deployed to market. It may not lead to the cheapest available software, but it should lead you to the best possible software. 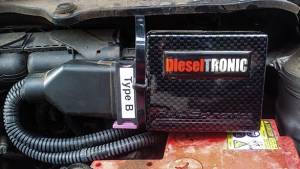